University of Illinois at Chicago researchers are conducting a study to determine whether binge drinking is related to cardiovascular disease in young adults who are not predisposed to the condition. 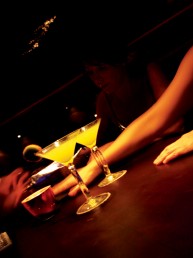 “Binge drinking or heavy episodic alcohol use is one of the most serious public health problems confronting American colleges,” said Mariann Piano, professor and head of biobehavioral science in the College of Nursing. Piano and Shane Phillips, professor and associate head of physical therapy in the College of Applied Health Sciences, serve as co-investigators on a two-year grant funded by the National Institute of Alcohol Abuse and Alcoholism, one of the National Institutes of Health.

Participants will be further categorized into the three groups based on their answers to a questionnaire and whether or not they have a blood biomarker called phosphatidylethanol, or PEth, which was previously discovered by Piano and Phillips and is found to be significantly higher in binge drinkers compared to moderate alcohol consumers.

Participants will undergo an ultrasound examination, as well as provide tissue samples, so the researchers can accurately evaluate their blood pressure in the aorta. Participants will also perform several exercises to provide Piano and Phillips clues as to how exertion may lead to higher than normal blood pressure. This, Phillips said, could be an early indicator that binge drinkers may be susceptible to cardiovascular disease.

The researchers will also measure participants’ arterial stiffness and pulse wave velocity — the rate at which the arterial pulse spreads throughout the circulatory system, a reflection of vascular aging.

“If the pulse wave velocity rises, it could be an indicator of an early risk for cardiovascular disease,” she said.

Young adults today are health conscious about food and exercise, but not about drinking alcohol, Piano said.

“There’s data to suggest that if you have bad drinking habits, they don’t just stop in college,” Piano said. “These kids are continuing to binge drink in their mid-20s and they haven’t stopped. Binge drinking is the new arteriosclerotic behavior among today’s youth.”

The new $420,000 federal grant to fund the study follows previous studies conducted by Phillips and Piano, where they observed physically active binge drinkers whose blood pressure and cholesterol were normal yet they had changes to their blood vessels and cells within their cardiovascular system. But they didn’t know why. The new grant will help answer that question.

“We’re not against drinking, but it’s teaching young people to be healthy consumers of alcohol,” Piano said. “We want them to live to be healthy and happy.”