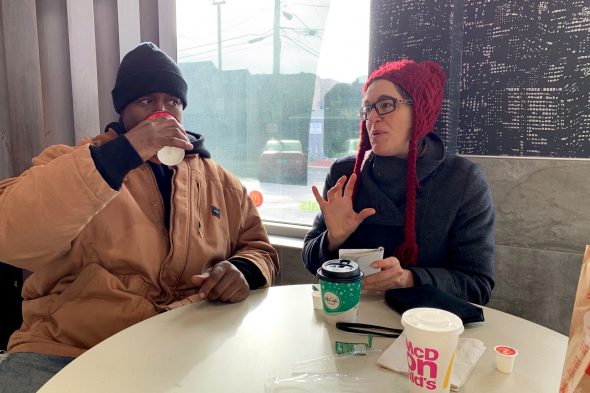 UIC assistant professor Laurie Jo Reynolds (right) with one of the co-organizers for the multidisciplinary campaign for which she received a “Changing Narratives Through Art” grant from the Art for Justice Fund. UIC Photo.

A University of Illinois at Chicago assistant professor has received a $100,000 grant to continue her work challenging the “demonization, warehousing and social exclusion of people” in the criminal justice system.

Laurie Jo Reynolds received a “Changing Narratives Through Art” grant from the Art for Justice Fund for her project on Illinois housing banishment policies. Those are laws that restrict where people may live after a criminal conviction.

The Art for Justice Fund was created by Agnes Gund, a philanthropist and art collector, who used proceeds from the sale of a multimillion dollar painting to start the fund with the Ford Foundation and the Rockefeller Philanthropy Advisors.

A component of this project is to compile stories of families experiencing homelessness and housing instability, Reynolds said. Through audio recordings, people describe the steps they must go through to comply with laws, hold down a job while meeting those requirements, and ultimately find a place to sleep.

Reynolds and volunteers have been going to Chicago police headquarters at dawn to meet with people who must re-register weekly because they lack a fixed address. People often wait for hours to register, arriving as early as four and five hours before the station opens to get a place in line.

“Technically, it is illegal for some of these guys to wait outside the police station, because it is across the street from a school and therefore within a public exclusion zone,” said Reynolds, adding that failing to register is a felony.

Reynolds, who joined UIC in 2015, said her project has developed collaboratively with people experiencing homelessness due to housing banishment laws and public conviction registries.

“We all want policies that promote true public safety,” Reynolds said. “But these laws drive people with homes into homelessness and people with jobs into unemployment, which is a damaging role for state government to be playing in the lives of formerly convicted people.”

Illinois has five state registries, which are police websites that publish personal data about people with past convictions, Reynolds said. The rules and reporting requirements have grown increasingly complex, leading to extended registration time and new incarcerations for technical violations. People on registry lists must go to police stations to re-register yearly, quarterly or weekly if they are homeless.

“It’s hard enough to keep a job while homeless, but no employer will let you take off one day a week to go to the police to re-register,” Reynolds said. 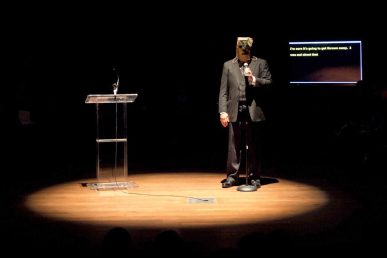 Stills from “A True Person of No Status”: A performance on Public Conviction Registries in 24 Parts. Photo by Soohyun Kim.

Most people with sex offense convictions are subject to housing banishment laws for life, even if they get off the registry. They cannot reside within 500 feet of a school, playground, child care center, home day care or any location providing programs exclusively to minors. “Taken together, these zones render nearly all housing illegal,” Reynolds said.

Even the Illinois Department of Corrections, or IDOC, can’t find housing for parolees leaving prison, she added. For the past decade, an average of 1,200 people remained incarcerated because of the housing shortage “manufactured” by state laws and parole requirements. Only once people finish their “parole time” in prison can they be released, and for many that means homelessness.

Reynolds, a policy advocate, has a long history working on criminal justice issues, focusing on the most extreme policies inside and outside of prison. She was the organizer of Tamms Year Ten, a grassroots legislative campaign to close Illinois’ notorious state “Supermax” prison, which former Gov. Pat Quinn shuttered in 2013. She was also in the 2010 work group convened by IDOC to address this housing shortage.

Last year, Reynolds was one of seven international artists invited to present a commissioned work at a summit entitled, “What is An Artistic Practice of Human Rights?” Her performance, “A True Person of No Status,” featured testimony from people on registries, advocates, and service providers, along with comedy and dramatic re-enactment, before an onstage audience. She also organized, with rape victim advocate Lynne Johnson, a policy symposium titled, “We Should Not Have Policies We are Afraid to Talk About,” which presented case studies about the impact of these laws, followed by dialogue between legislators, state officials and victim advocates.

The Art for Justice grant will help this growing alliance seek more pragmatic policies. Given that 47 percent of Illinois adults have some criminal record, these laws impact people at high rates and have disproportionate racial outcomes, she said. For example, one in every 227 men in Illinois is on the sex offense registry. For African-American men, this rate is one in 100, according to Reynolds.

Earlier this year, Reynolds was one of only eight people internationally to receive the inaugural Soros Arts Fellowship by the Open Society Foundations and received an $80,000 stipend to support this project. Essential to this work is building community partnerships to advocate for policies that prevent victimization, support survivors and allow people to lead positive and productive lives after a conviction.

“We have to let people move on,” Reynolds said.