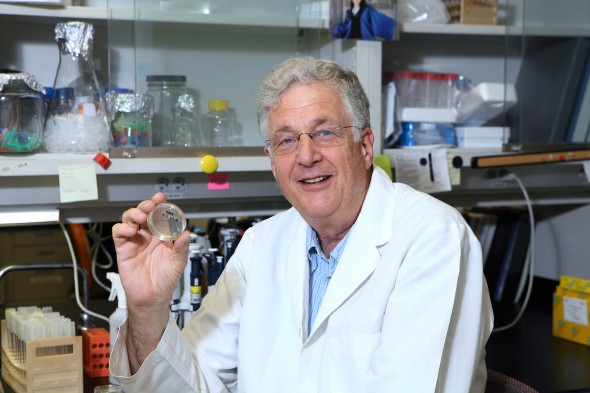 “The challenge is always to provoke the students to think about the subject, and to give them the basic tools to use for doing that,” says Donald Morrison, professor of biological sciences.

Students who have worked in Donald Morrison’s laboratory have learned an important concept: trust the data more than the theory.

Morrison, a biological sciences professor, trusted the data when he began his research career at UIC 40 years ago, a decision that led to groundbreaking discoveries about the genetic functioning of pneumococcus — a pathogen that causes pneumonia, meningitis, sepsis and middle ear infections in humans — and the development of new techniques and tools used to study bacterial communication.

“The results were always not what we expected, but something different,” Morrison said as he reflected on the time he spent working with his first undergraduate student.

“Most people would have thrown the data away and said, ‘This can’t be right. It’s not what I expected,’ but we didn’t do that. Instead, we allowed the data to talk to us and tell us something we hadn’t realized we should be asking about.”

Morrison studied bacteria’s genetic cannibalism, or how one bacterium kills another, steals its genes and incorporates the genes into itself. The gene-transferring process can make bacteria resistant to antibiotics. With unexpected results from experiments, Morrison, his students and colleagues found what bacteria do during this process and how they talk to and attack each other. They also discovered a protein that protects DNA in the uptake process and eventually identified 50 genes that allow genetic recombination to happen. His work, studies and the genetic tools he’s developed since then have not only given scientists the opportunity to study and manipulate genes of wild bacterial strains in labs, but he’s also changed the understanding, research, treatment and prevention of diseases caused by the bacteria.

Since 2000, he’s received $2.5 million in grants to support his research. In 2010, UIC recognized him as Researcher of the Year.

The path he took to become a leading expert on the biology of streptococcus pneumonia started when he was an undergraduate at Harvard University.

“There was this buzz going around that genes and DNA was something that you could understand chemically,” Morrison said.

So he thought biology would be an interesting major — and it was. Morrison even took a course taught by a co-discoverer of the double helix structure of DNA before graduating and attending Yale University, where he earned a Ph.D. in molecular biophysics.

“He passed on some important ideas about doing science, and we try to do the same,” said Morrison, who has advised 21 Ph.D. students and taught or mentored more than 12,000 undergraduates in genetics.

“The challenge is always to provoke the students to think about the subject, and to give them the basic tools to use for doing that.”

He’s kept in touch with some; many have successful scientific careers in places around the world.

“The fun part about having a specialty and knowing about it is if other people want to learn about it,” Morrison said. “[Working with students] is great motivation for doing science.”