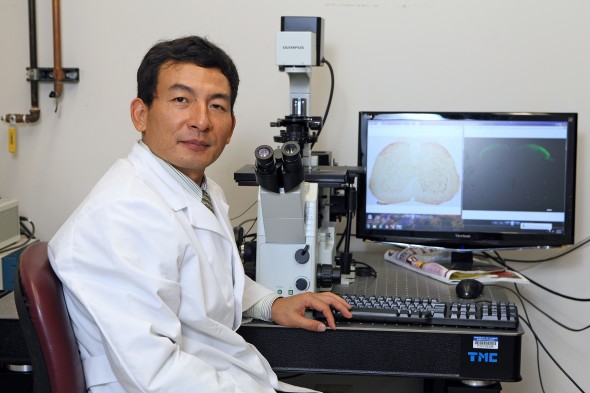 “It’s a tremendous honor to be nominated and selected by my colleagues,” says Jim Wang. Photo: Jenny Fontaine

“While chronic pain, tolerance and addiction to opioids to relieve pain, and a heightened sensitivity to pain incurred by prolonged use of opioids, may seem unrelated, we believe they share certain common underlying structures,” Wang said. “We’re using epigenetics and cellular phosphorylation signatures to find a common denominator.”

Wang’s primary focus is on pain from sickle cell disease and cancer. He and his colleagues have developed an array of cellular markers and in vivo tests that can be used to study ongoing spontaneous pain, along with evoked hypersensitivity to heat, cold and mechanical stimuli.

Among the many studies he is conducting, he has identified that phenothiazine antipsychotic drugs such as trifluoperazine and haloperidol may be used to fight drug addiction, improve analgesic action of opioids, and reduce chronic inflammatory and neuropathic pain.

Originally trained as a pharmacist, Wang joined UIC’s faculty in 2001. Since that time he has been continuously funded by the National Institutes of Health and currently serves as principal investigator on three R01 grants. His work has been published in numerous high-impact journals, he has been the featured speaker at many symposiums and he is a permanent member of the NIH’s Somatosensory and Chemosensory Systems Study Section.

In addition to being a pharmacy professor, Wang is a member of both the UI Health Cancer Center and Sickle Cell Center.

Wang said he was “humbled” to be named a University Scholar.

“I’ve built my entire academic career at UIC,” Wang said. “It’s a tremendous honor to be nominated and selected by my colleagues.