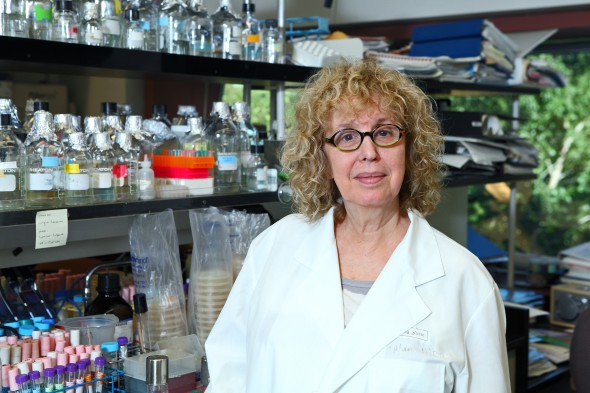 “I am interested in understanding how cells coordinate transport of materials to different destinations,” says Nava Segev, professor of biochemistry and molecular genetics. Photo: Jenny Fontaine

Nava Segev thinks of herself as a “cell mechanic.” That’s because she has studied the inner workings of cells for a large portion of her professional academic career.

“I am interested in understanding how cells coordinate transport of materials to different destinations,” said Segev, professor of biochemistry and molecular genetics in the UIC College of Medicine.

Cells, like whole animals, have specialized “organs,” except in cells, they are microscopic and are called organelles. Organelles make proteins, digest and recycle waste products and sort cellular products to make sure they get to where they need to go in the cell. Vesicles are like tiny bubbles that carry materials from one place to another within the cell. If the vesicle fuses with the cell’s outer membrane, the material inside the vesicle is released to the outside of the cell.

Understanding how cells traffic materials is an area of increasing importance, and this year, the Nobel Prize in Physiology or Medicine was awarded to a Japanese researcher who elucidated mechanisms underlying autophagy, a fundamental process for degrading and recycling cellular components, which relies on vesicular trafficking.

The breakdown of proper cellular transport underlies numerous diseases, including diabetes, certain neurodegenerative diseases and even some cancers. Nowhere is the importance of cellular transportation more clear than in neurons, which can be several inches long. Materials that need to get from one end to the other are ferried along the cytoskeleton of the cell — strands of stiff molecules that give the cell its shape and form and provide tracks for the vesicles — by motor proteins that “walk” their cargo along the cytoskeleton. Muscular dystrophy is thought to be driven largely by interruptions in this kind of cellular shipping. The question that Segev’s lab asks is how vesicular trafficking is regulated.

In a 1988 paper that appeared in the prestigious journal Cell, Segev and colleagues described the role of a protein called Ypt1 in yeast and its counterpart in mammals called Rab1 in intracellular trafficking and the secretion of cellular products. Later, Segev described the mechanism of action of these crucial transport regulators in a paper in one of the top research journals, Science. Her recent paper, published in Developmental Cell, shows that several Ypts help regulate trafficking. The human counterpart of Ypt1, Rab1, was recently shown to be involved in cancer.

Recently, Segev has been studying the role of Ypts in another cellular process called autophagy, or self-digestion.

“Autophagy can be in response to stress, for example, lack of nutrients. In this case, the cell may decide to recycle components of itself that it doesn’t need,” she said.

Autophagy also helps clear out excess of components that were overproduced by mistake. In this case, autophagy serves as a type of quality control. Segev has shown that Ypt1 is required not only for moving vesicles loaded with “good” cargo to their proper destination, but also for ensuring that vesicles carrying recyclables are shuttled for clearance.  This work was reported in the journals PNAS and pLOS-Genetics.