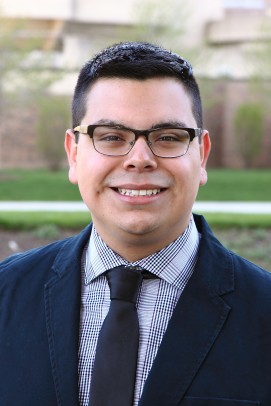 “Believe in yourself, no matter what,” says Ricardo Ramirez. (Photo: Jenny Fontaine)

When Ricardo Ramirez started his undergraduate career at UIC, he wasn’t sure what he wanted to do.

“I knew I was really good in math in high school, so I picked industrial engineering,” Ramirez said. “Then I figured out it wasn’t my passion.”

He switched gears and decided to study mathematical computer science and psychology, and later decided to focus on psychology and pre-occupational therapy.

Ramirez has thrived since finding his passion — he graduates next month with a perfect 4.0 GPA.

He’s this year’s winner of the Donald and Leah Riddle Prize for Outstanding Graduating Senior. The prize, named for a former chancellor and his wife, is among UIC’s top undergraduate honors.

“I was always thinking in the back of my head that maybe I’m not good enough for this award or that opportunity,” said Ramirez, senior in the Honors College. “But I thought, ‘Maybe if I push myself a little harder or stay up a little longer, I can push myself further along toward my goal of being an occupational therapist.”

Ramirez decided on occupational therapy to combine his interest in physical and mental health with his passion for service. He focused his Honors College capstone project on evaluating the usability of three accessible smartphones among users with cerebral palsy.

“The primary mode of input for smartphones is touch, and that may not be accessible for someone who has a physical disability affecting their upper-extremity,” he said.

Ramirez will return to UIC in the fall to begin graduate studies in occupational therapy. He hopes to finish his graduate degree, practice for a few years, then get a Ph.D. in rehabilitation sciences.

“I want to look into how to minimize health disparities within underserved groups in the disability community,” he said.

Last summer, he interned at the Heritage Healthcare Center in the Harlem neighborhood of New York City through the Summer Public Health Scholars Program at Columbia University. There, he helped implement outreach efforts to promote colorectal cancer screenings.

“I learned through that experience that I wanted to serve underserved communities,” he said.

A first-generation college student from Melrose Park, Ramirez pursued mentoring and leadership opportunities on campus. He is an undergraduate peer mentor, Honors College student ambassador, president of the UIC Pre-Occupational Therapy Club and was an editor of the Honors College newsletter The Ampersand, among other volunteer activities.

“I had, and to this day still have, a variety of mentors, such as family, friends, professors and faculty that have given me invaluable advice with how to navigate UIC and make the most of my four years as an undergraduate,” he said. “I wanted to do the same for other students so that they could be successful in their endeavors, so that they, too, could help another student in the future.”

His advice to other UIC students?

“Believe in yourself, no matter what,” he said.