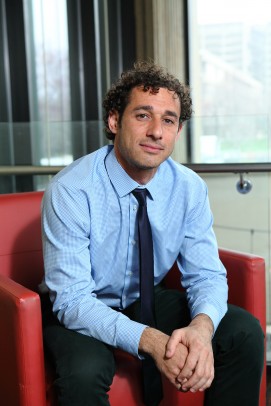 Whether it’s teaching Chicago high school students how to effect local health policy changes through his work with Mikva Challenge, or teaching public health literacy to undergraduates at UIC, Joshua Prudowsky has one overarching goal: to educate, engage and mobilize his students.

A significant portion of his class focuses on media literacy — the use of media, including social media, to promote public health messages.

“How do you get 100,000 people to change a negative health behavior?,” Prudowsky said. “Media plays such a key role in public health that it’s important to understand it and learn how to leverage it to influence people towards more healthful behaviors.”

In the class, students look at how different media outlets cover the same health story, analyze Super Bowl ads and develop their own public health-related media campaigns. Students do market research to be sure they are reaching their target audience through the media platforms that audience uses.

Prudowsky said that for young people, Snapchat, followed by Instagram, are the most popular media channels. The learning goes both ways.

“My students are always teaching me new things, especially about social media because they are such heavy users,” he said.

Prudowsky, who grew up in Chicago, credits his parents with instilling a sense of civic awareness and social justice — two components that sit at the heart and soul of public health.

“I was probably at more protests by the time I was 8 than most people have been to in their lives,” Prudowsky said.

Prudowsky wants to pay it forward.

“I want to help produce a group of public health activists who, if they believe in something, they’ll fight for it, and so I hope to instill in them a strong passion for public health,” he said.