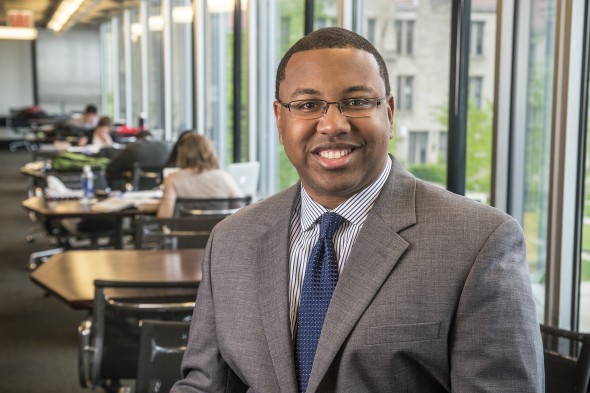 “Now I have this training and this ability to give back to those who don’t have a voice, and it’s very important to me to be able to provide, when I can, help,” says Kenneth Thomas.

Since President Donald Trump signed his executive order on immigration, the Immigrant Refugees Assistance Project has reported that more than 1,000 attorneys in the Chicago area have signed up to volunteer their services to refugees and detainees.

Among them is 2013 UIC graduate Kenneth Thomas, an attorney at Skadden, Arps, Slate, Meagher & Flom. Thomas, a former student trustee, wanted to assist individuals affected by the restrictions so he drove to O’Hare International Airport Jan. 29 to offer free counsel.

“On Sunday morning, I woke up and talked to a friend of mine, a friend from law school, and we said, ‘We’re gonna go and we’re going to see if we can help out in any way,’” Thomas said. 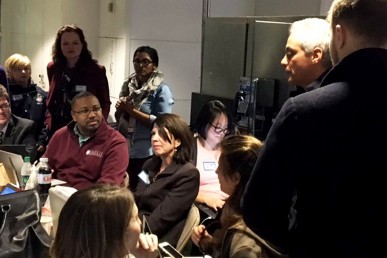 Thomas ended up staying at O’Hare’s international terminal for 13 hours, canvassing through a hectic scene filled with protesters, journalists and citizens anxiously waiting for loved ones.

“There was a lot of confusion amongst family members and friends who were there to pick up loved ones or their friends,” Thomas said. “Some of them were unsure as to what was going on. A few of them, who I spoke to, had waited for several hours for their family member to come out.”

Although no attorneys in Chicago needed to file a habeas petition — an action challenging the state agency holding a defendant — or temporary restraining order on detainees’ behalf, the group of about 30 to 40 was able to help ease people’s apprehension by opening lines of communication.

“We would walk around and try to see if there were individuals  waiting for their family members or friends, and see if they were worried or how long they’d been waiting in the terminal. We were hoping to get an idea as to where they were coming from, and what flight were they on,” Thomas said. “We were  collecting information so we could get an idea of who is being held or potentially being held, so that we could begin to help .”

The Chicago Tribune reported that at least 50 people were held at O’Hare Jan. 29 — which was the highest amount from the weekend.

Thomas’s volunteer work stems from his passion to support and aid people from all backgrounds. In 2012, Thomas, who was UIC’s Lincoln Laureate winner, told UIC News he wanted all people to have equal opportunities. Now, with a law degree in hand, he’s giving that support to those in need.

“I grew up in the south suburbs of Chicago, black guy, single-parent household, my mom never went to college, didn’t make much money and had to raise two kids on her own,” Thomas said. “I come from a background where 20 years ago, I could have been my own pro-bono client or my mom could have been.

“So now that I have this training and this ability to give back to those who don’t have a voice, it’s very important to me to be able to provide, when I can, help.”