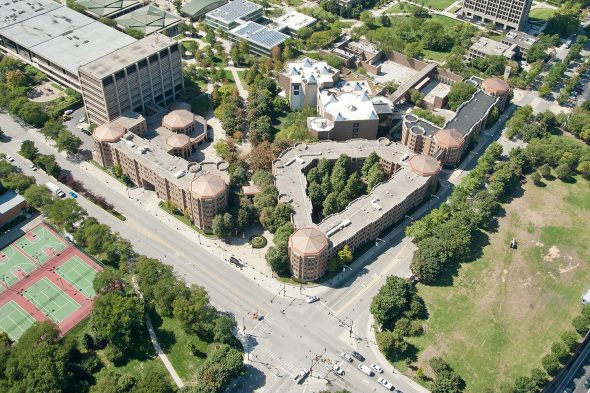 Harrison Field, the grassy vacant lot in the image, at the intersection of Halsted and Harrison streets is where the proposed performing arts center at UIC will be built. Photo: Brad Cavanaugh

Three architectural teams with world-wide reputations for their award-winning design work, thoughtful approaches to urban public space, and extensive experience leading multi-million dollar projects have been chosen as finalists to present concept design proposals for a state-of-the-art performing arts center on the University of Illinois at Chicago campus.

The “Center for the Arts” at UIC will serve as a gateway and bridge between UIC and the world and as a destination for innovative arts and cultural production. The center will be situated on the northwest corner of UIC’s east side of campus at Halsted and Harrison streets in a currently vacant location known as Harrison Field.

The aim of the competition is for the teams to produce compelling conceptual and visual material that not only represents the innovative work of the schools in the College of Architecture, Design, and the Arts, (known as CADA) but contributes to UIC’s distinctive mission as a university that seeks to be a leader both in research and in educating a diverse student body.

“We’re thrilled to have three such brilliant and adventurous finalists and we look forward to seeing how they’ll envision a center for the arts that will both dramatize CADA’s cutting-edge work in architecture, design and the arts and speak to UIC’s egalitarian mission,” said Walter Benn Michaels, interim dean of CADA.

The building is envisioned as a dynamic center, at the intersection of thinking and making, where new ideas are explored and where each stage of the process of creative production is shared with the broader world. As a public, urban hub for performance and gathering, and a home for the School of Theatre and Music, the project includes an 88,000-gross-square-foot building with a 500-seat concert hall and a 270-seat flexible main stage theater, as well as instrumental and choral rehearsal halls and theater production shops. Also included are supporting facilities, a donor lounge, small café/jazz club and exhibition space.

The three finalists were chosen from an international pool of 36 teams that responded to a public request for qualifications. The proposals from the finalists will be due in March. Public presentations by the teams will occur in early April, followed by a public feedback period. The final selection will be announced at the end of April. Currently, university and CADA officials are in the process of raising the anticipated $94.5 million construction budget through private and public funds. 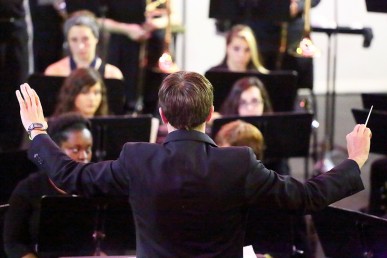 The proposed performing arts center would be the home for the School of Theatre and Music. Photo: Timothy Nguyen

In conjunction with the international design competition, CADA will host the “The Otto and Marlys Coelln Symposium,” entitled, “Public Performances: The Arts and Politics of Architecture,” focused on the ways in which architecture both delivers and deviates from contemporary expectations for its political, technical, and aesthetic performances. Funded by donors’ bequest, “The Otto and Marlys Coelln Symposium” will be held on Saturday, March 23, at the School of Architecture at UIC.

The establishment of a center for the arts was first envisioned in the 1960s by the original architects of the UIC campus, Walter Netsch and his team at Skidmore, Owings & Merrill, as a later phase for the new campus on Chicago’s Near West Side, which opened in 1965. The largely unknown project, dubbed “Project Y,” was intended to underscore the importance of the arts to the new university and to the city. Netsch originally envisioned it as “an equivalent of Lincoln Center to Chicago,” referencing New York City’s famed center for the arts. The massive complex was to include a large public plaza, four theaters, and a recital hall, along with music, drama and dance education spaces, and an art museum.

The proposed project is part of UIC’s master plan, approved by the University of Illinois Board of Trustees in November, which calls for major physical development of the campus over the next 10 years.

“The proposed performing arts center is a cornerstone of the latest master plan and its location will serve as a gateway to the campus and will become a cultural anchor in the city of Chicago,” said Chancellor Michael Amiridis. “As Walter Netsch envisioned many years ago, this center will have the potential to become ‘the Lincoln Center of Chicago.’”