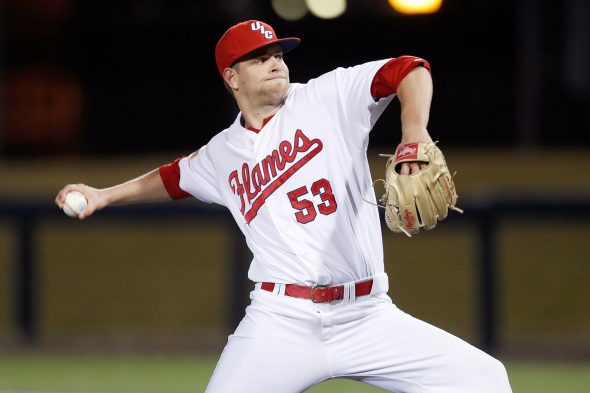 UIC continued its dominance on the mound Sunday with a 2-0 shutout of the Milwaukee Panthers for a three-game series sweep.

Sophomore Jacob Key started the game for the Flames (23-14, 11-7 Horizon League) and he was nothing short of brilliant. The Murfreesboro, Tennessee, native allowed only two hits in seven scoreless innings of work. After a two-out single in the first from the Panthers (16-22, 9-9 Horizon League), Key retired 13 consecutive hitters through the fifth inning. Milwaukee opened the sixth with a base hit, but Key retired the next two before his catcher Aaron Ackerman threw out the runner to end the sixth.

Noah Masa and Alex Padilla combined to throw the final two innings in relief. Neither gave up a hit and both struck out one. Padilla picked up the game’s final two outs to earn his sixth save of the season.

Dominic Smith continued to swing a hot bat as he drove in UIC’s two runs, both on two-out base hits, and both to score Thomas Norton.

Following a two-out single in the top of the first, Key retired seven straight hitters through the top of the third, then the offense gave him the first edge of the day. Norton opened the home-half of the third with a base hit to the opposite field in right. The third baseman was at third following a passed ball and an infield single by Matt Bottcher. He scored when Smith laced a base hit through the left side. The Flames were poised to add another run when Scott Ota hit a ball destined for center field.

Norton ignited the offense once again in the bottom of the fifth. The junior walked to begin the inning and he moved to second on a sacrifice bunt from Ryan Lin-Peistrup, and third on Derrick Patrick’s grounder to second base. Norton then scored for the second time Sunday when Smith rifled a base hit to right field with two away and two strikes in the count.

That was plenty of firepower for Key. He surrendered a second base hit, a single, to open the sixth inning, but got fly balls to Patrick in center and Smith in left for the first two outs.

Key’s outing was complete after seven scoreless innings and 75 pitches.

The Flames host the Benedictine Eagles at 6:35 p.m. Wednesday.