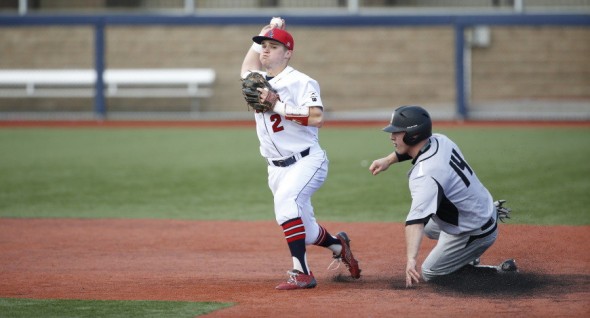 The game began with promise but ended in defeat as UIC’s 2016 season came to a close May 25 in a 4-2 loss against Valparaiso during the Horizon League Baseball Championship. UIC finished the campaign with a 25-30 overall record.

The Flames scattered five hits as Cody Bohanek provided the only offense for the Flames in the contest. He led off the game with a solo home run and later drove in Rob Calabrese on a sacrifice fly. Connor Ryan started for UIC and surrendered four runs on nine hits over 4.2 innings. Valparaiso strung four consecutive hits together, scoring twice in the first inning to take a 2-1 lead and added a solo run the second inning.

Senior Trevor Lane pitched the final three innings and did not allow a hit, retiring 10 of 11 batters. The left-hander concluded the season with a 1.41 ERA and 90 strikeouts placing him sixth on the UIC single-season list in both categories.

David Cronin finished with 80 hits which tied him for seventh on the single-season charts.