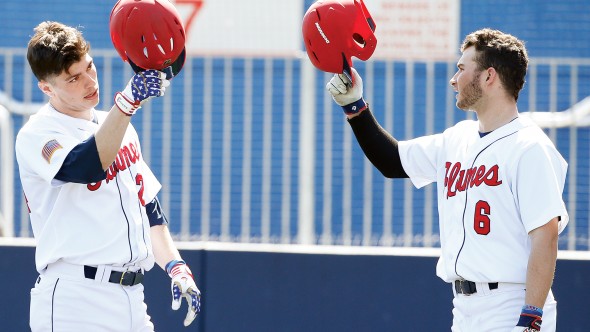 The Flames secured their 20th victory of the season, including 10 in Horizon League play. Overall, UIC has won 16 of its last 18 contests, and 20 of its first 28 games for the first time since the 2002 season.

All nine players in UIC’s starting lineup collected at least one hit Sunday, with seven notching two or more. Four Flames tallied three hits each, and Cody Bohanek and Rob Calabrese each drove in three runs in the victory.

Jack Andersen scattered three runs over five innings and struck out four to collect his second win of the season.

The Flames host Northern Kentucky this week, with games at 6:05 p.m. Thursday and Friday and 1:05 p.m. Saturday at Curtis Granderson Stadium.

During Sunday’s game Ricardo Ramirez got the offense ignited to give UIC a 1-0 lead.

Oakland evened the score in the bottom of the second before Andersen got a pair of ground balls to end the frame.

The Flames scored on five runs on six hits in the third inning, then exploded for five more runs in the top of the fifth inning. Andersen allowed three runs over five innings and gave way to Connor Ryan in the bottom of the sixth, who preserved an 11-4 lead for the Flames.

The Golden Grizzlies made a little more noise in the bottom of the seventh inning, cutting the deficit to four runs.