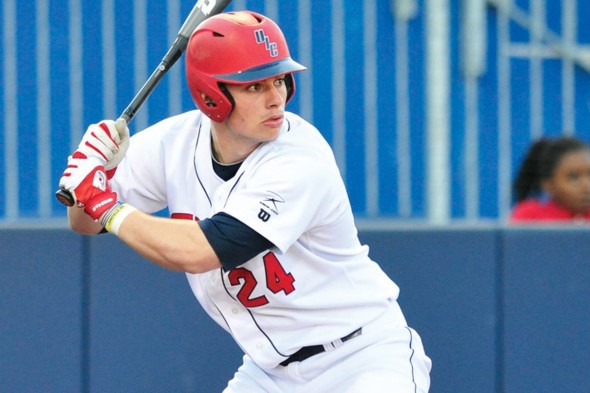 UIC scored seven runs in the final two innings Sunday to come from behind and knock off the University of Wisconsin-Milwaukee at Granderson Stadium, 8-7, and complete a three-game sweep of the Panthers.

With the bases loaded, Ricardo Ramirez swung at the first pitch he saw from Milwaukee’s Jared Reklaitis in the top of the eighth inning. He belted it beyond the wall for his second career grand slam, one that gave UIC a 5-4 lead. The Flames added three more runs in the ninth, highlighted by a towering home run from Rob Calabrese.

UIC needed all eight of those runs as the Panthers mounted a furious rally in the bottom of the ninth. UWM scored three times and had the game-tying run at second and the go-ahead run at first when reliever Alex Padilla struck out Matt Quartel to end the game.

The Flames improved to a season-high 10 games above .500 with the win (17-7). UIC won for the eighth time in nine Horizon League contests. Overall, UIC has won 13 of its last 14 games.

The Flames compete at Oakland in Rochester, Michigan, during a three-game series this week, beginning at 2 p.m. Friday.