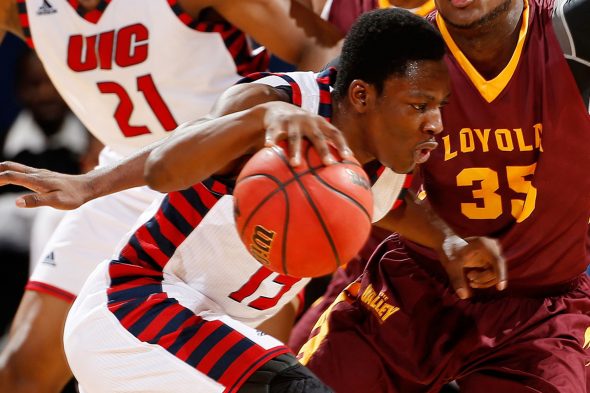 The men’s basketball team will host St. Francis at the UIC Pavilion tonight.

The men’s basketball team will play an exhibition game at 6:30 p.m. tonight against St. Francis at the UIC Pavilion. All proceeds from the game will go toward hurricane relief.

The late addition to the preseason schedule came about following recent discussions by the National Association of Basketball Coaches (NABC) to come together in support of hurricane relief. Over the last several months, storms have severely damaged areas in Florida, Louisiana, Texas, Puerto Rico and the U.S. Virgin Islands.

The UIC Lettermen’s Club and United Way of Metro Chicago will team up to collect monetary donations to support those in need.

This is a non-ticketed event. UIC students will be admitted free with a valid i-card, while all monetary contributions are welcome. A suggested donation of $10 will be collected by representatives of United Way of Metro Chicago and UIC Lettermen’s Club at the gates of the UIC Pavilion. All lower-level seating will be general admission.

“As we prepare for the upcoming season, we all want to do our part to lift up those who need a hand,” said head coach Steve McClain.

“College basketball brings so many people together throughout the course of the year for many reasons. This particular game will bring together two local teams that are preparing hard for the upcoming season, and it will bring needed attention and support to those touched by the hurricanes that have devastated parts of our country.”

The Fighting Saints won 18 games last season under the direction of head coach Ryan Marks, who begins his fifth season at the helm. Senior Iain Morison is the team’s top returning scorer after averaging a team-best 16.7 points per game a year ago. The center also averaged 6.7 rebounds per game and had a team-high 38 blocks on the season.

UIC is coming off a season in which it won 17 games and advanced to semifinals of the College Basketball Invitational. The Flames returned to the postseason for the first time since 2013 and were the only Horizon League program to win multiple postseason games a year ago with victories over Stony Brook and George Washington in the first two rounds of the CBI.

The Flames, led by All-Horizon League preseason team selections Dikembe Dixson and Tai Odiase, will ignite the regular season and begin a busy stretch of four home games in eight days starting at 7 p.m. Nov. 10 against North Carolina Central. The Eagles are coming off a 25-win season and a berth in the 2017 NCAA Tournament. Tickets are available by calling 312-413-8421.