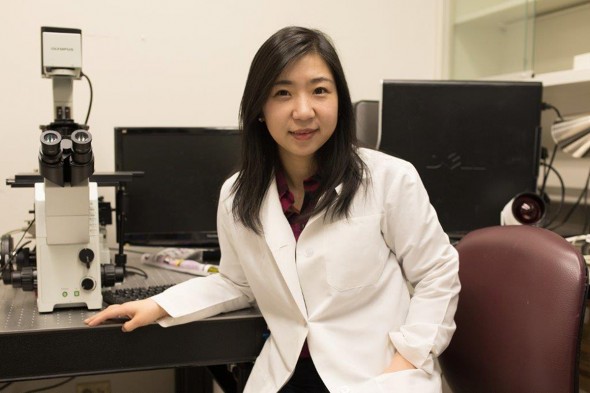 Ying He, research assistant professor of biopharmaceutical sciences, is developing pharmacological interventions to slow the progression of sickle cell disease.

Ying He, research assistant professor of biopharmaceutical sciences, has received a Pathway to Independence grant from the National Institute of Health’s National Heart, Lung, and Blood Institute to advance her career as a research scientist.

Limited to the most promising postdoctoral investigators, the Pathway to Independence grant provides up to five years of support consisting of two phases: the first gives awardees one to two years of mentored assistance, while phase two provides up to three years of independent support contingent on securing an independent academic position.

She is working to develop effective pharmacological interventions that can slow the progression of sickle cell disease and improve the quality of life for patients. Sickle cell disease is a group of inherited disorders that affects hemoglobin, the molecule in red blood cells that delivers oxygen to cells throughout the body.

About 100,000 Americans — primarily of African or Hispanic descent — suffer from the disease, which can damage lung tissue, cause excruciating pain, stroke, and hemolytic anemia. The blockage of blood flow caused by sickled cells also causes damage to most organs, including the spleen, kidneys, liver and brain.

Only one drug — hydroxyurea — is currently approved by the U.S. Food and Drug Administration to treat sickle cell disease. The drug induces the production of fetal hemoglobin and reduces the severity of the disease. However, more than 50 percent of patients do not respond to hydroxyurea, Ying He said.

There remains a critical and urgent need to identify additional fetal hemoglobin production agents, as “increased fetal hemoglobin can alleviate disease symptoms and decrease acute painful episodes,” she said. While new treatments are extending the lives of patients with sickle cell disease, little progress has been made in understanding and treating sickle cell pain, especially chronic pain.

“Pain is not only a life-long companion but also a predictor of mortality rate in patients with sickle cell disease,” Ying He said.

Z. Jim Wang, professor of pharmacology and pharmaceutics in the UIC College of Pharmacy, said Ying He’s award is well-deserved.

“Ying excelled in her graduate studies and postdoctoral training at UIC,” Wang said. “I’m so glad that her peer reviewers agreed that she is a bright scientist with great potential for a successful independent academic career. The Pathway to Independence grant is highly competitive and is a prestigious career award. I look forward to seeing Ying move on to a tenure-track position in the near future.”

In addition to her latest award, Ying He has twice been named a winner of the AAPS National Biotech Student Award by the American Association of Pharmaceutical Scientists; a NIH Sickle Cell Scholar; and has won the UIC Best Dissertation Award.