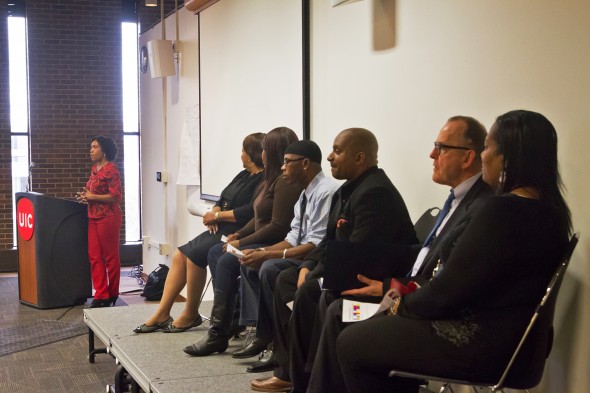 Participants from West Garfield Park and North Lawndale are working with the Center for Public Safety and Justice to mend relationships within the communities. ­(Photo: Vibhu S. Rangavasan)

Groups gathered in Student Center East Oct. 27 to show that talking and breaking bread with communities breaks barriers within them, too.

The Building Blocks project, a civic engagement initiative with participants from West Garfield Park and North Lawndale, was designed to “look at issues related to health, energy and the environment, and then it evolved to public safety, which seemed to be sort of the key issue,” said Juliana Stratton, the project lead and the director of the Center for Public Safety and Justice in the College of Urban Planning and Public Affairs.

Stratton and her team used a restorative justice approach to inspire creative problem-solving and solutions among public safety stakeholders and community residents, including participants from the Cook County Jail Alumni Association who have been in the criminal justice system. Other participants were affiliated with United for Better Living, Chicago Park District, Uhlich Children’s Advantage Network, Sankofa House, Congressman Danny Davis’s Office, Circuit Court of Cook County and the Chicago Police Department.

“A restorative approach is really about…relationships that we have with one another, and how we maintain and sustain those relationships,” said Vanessa Westly, a 25-year Chicago Police Department veteran.

Conflicts arise and create public safety issues when there’s a breach in a relationship, she explained.

“We shared intimate things at that table, and in the midst of sharing those things, you then turn to the next person and you would say, ‘Well, I’ve never been through that, but what can I do to help you through that?’” she said. “That’s what family does.”

“We take this job to help and build,” she said.

The project taught Jose Abonce, a CUPPA master’s student and graduate assistant for the Center for Public Safety and Justice, the power of creating a climate where people build communities by supporting one another, too.

“Building Blocks expanded my horizons and allowed me to imagine ways in which civic engagement could encourage a shift in policies when given the opportunity to thrive and when community stakeholders are informed and consulted with, involved and collaborated with, and empowered,” he said.