“Javier is a proven and talented leader, scholar and innovator who will bring thought leadership to UIC’s academic and research enterprise,” said UIC Chancellor Michael Amiridis. “His vision and collaborative approach will help to shape our strategic priorities and the University’s future.”

Reyes has served in his current roles as West Virginia University’s Milan Puskar Dean of the John Chambers College of Business and Economics since 2016 and vice president for Start-up West Virginia since 2018.

Under his leadership, the College of Business was named by former Cisco Systems CEO and alumnus John Chambers and focused on the growth of experiential learning, with an emphasis on synergies with engineering and the health sciences. Reyes built impactful corporate partnerships to strengthen student placement and serve West Virginia’s land-grant mission. Furthermore, he spearheaded the transformation of the college into a pillar of inclusive entrepreneurship and innovation for the university and the state, working closely with state partners and private industry to grow West Virginia’s start-up network. 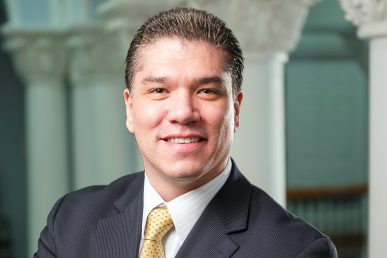 During his tenure, the total enrollment of the Chambers College of Business grew by 20% and new online degree programs were launched in Healthcare MBA, MS Economics and MS Cybersecurity. He also launched the Building Beyond fundraising campaign to construct a futuristic new home for the college, which will open in 2022.

Prior to moving to West Virginia, Reyes served as the vice provost for distance education at the University of Arkansas and as the associate dean for undergraduate studies and executive education at that Arkansas’ Sam M. Walton College of Business. He joined the economics faculty of the University of Arkansas in 2003, and he has been an invited lecturer or visiting scholar at a number of institutions internationally, including the Clinton School of Public Service and the International Monetary Fund. He also has served as an academic scholar in the European Bank for Reconstruction and Development in London, and as a research analyst for the investment firm Value Casa de Bolsa, headquartered in Mexico.

“The University of Illinois Chicago is a dynamic national leader in higher education with tremendous impact as a world-class research university that is home to a culturally rich and diverse student body,” Reyes said. “As difficult as my decision was to leave West Virginia University after five years, I was deeply inspired by UIC’s commitment to building an inclusive campus culture, their pioneering spirit and their vision to transform the world through eliminating disparities in economic opportunities, health and education. I am thrilled for the opportunity to work with the UIC team to propel their academic mission into the future.”

Reyes will succeed Provost Susan Poser, who is becoming the next President of Hofstra University, and Karen Colley, dean of the Graduate College, who is serving as acting provost.