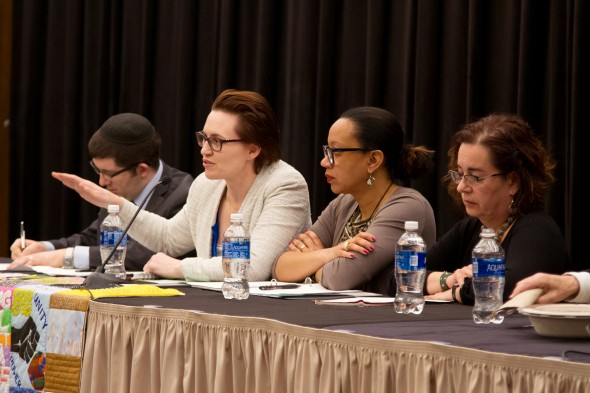 Even on a diverse campus like UIC, free speech is a hot-button issue.

The heat was turned up last month when anti-Semitic posters were found around campus.

The April 6 Campus Conversation — part of a yearlong initiative sponsored by the Office of the Provost — centered on addressing the posters and discussing what constitutes protected free speech under the First Amendment. A follow-up open forum is scheduled for noon April 12 in the Thompson Rooms, Student Center West.

UIC student Amy Levine attended the event after hearing about the posters.

“[I came] to figure out how we can fix the problem,” she said.

“The time is right, here at UIC, to engage in this discussion about these issues with the goal of respecting and encouraging the free and open exchange of ideas, while maintaining the diverse and inclusive community that UIC prides itself on,” said Provost and Vice Chancellor for Academic Affairs Susan Poser, who moderated the event. “And this is no small task.”

Nahmod, a well-known expert on constitutional law and civil rights, kicked off the event by detailing the background, phrasing and pitfalls of the First Amendment.

With the historical foundation laid, Winberg localized the issue by confronting the anti-Semitic posters found on campus last month.

He pushed students to consider how they practice free speech.

“Posing the question whether a specific act of free speech is legal according to the laws of our country, strikes me as a low bar,” he said. “For my students at Hillel and for all of us here, I would encourage a more spiritual frame of reference. What speech helps build a society of respect and harmony?”

After the event, students talked about how the conversation was a solid beginning, but it should continue.

“It’s necessary to keep pushing this conversation around the First Amendment and what is free speech?,” said Ian Torres, a student in the crowd. “I think we should have an understanding of it at the government level, but also I want to see it brought to the university level.”