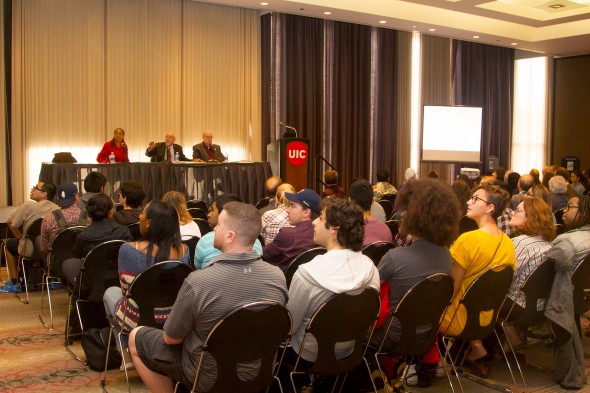 Panelists at the October Campus Conversation event discussed the impact of the election and the importance of voting. ­(Photo: Vibhu S. Rangavasan)

UIC community members filled a conference room in Student Center East Wednesday, listening intently to panelists discussing everything from the Trump phenomenon to how the presidential election could affect the budget.

Special guest Laura Washington readied herself before diving into her talk.

“Let me first ask you this, because this is important,” said Washington, a columnist with the Chicago Sun-Times. “How many of you are registered to vote?”

Nearly every one of the 120 people in attendance raised their hand.

The panel discussion is the second installment of a yearlong initiative known as the Campus Conversation series. Sponsored by the Office of the Provost, the series is “intended as a way to learn about the issues that are affecting our lives, and have a community discussion about them,” said Susan Poser, provost and vice chancellor for academic affairs.

Washington was one of three panelists for this month’s topic, “The Election of 2016: Engagement, Conflict & the Common Good.”

“I take my hat off to…the provost and to the university going around and engaging your students and faculty around this election,” Washington said. “I speak on campuses all of the time, and I’m not seeing this or hearing this in other places.”

The multimedia, award-winning journalist covered topics like the vice presidential debate, communities of color in the election and the black vote.

Benjamin Page, a professor of decision making at Northwestern University, was also a panelist. He discussed the
special aspects of the 2016 election, the breakup of the Republican Party, angry voters and what might happen after the election.

“We’re truly at a crossroads,” said Dick Simpson, professor of political science and the event’s moderator. “But we’re making some fundamental questions about the future of our country.”

Simpson talked about dark money, the influence and use of the internet and social media, and what the outcomes of the election could mean for Illinois residents and the UIC community.

He also noted that the university has registered more students to vote than at any other time in UIC’s history. More than 350 students were registered to vote near the primaries. Since then, UIC has registered 781 students. Leaders expect to register more than 1,000 new voters among the student population closer to election time.

“You control the outcome,” he said.

In November, the series will focus on topics of immigration, migration and displacement.