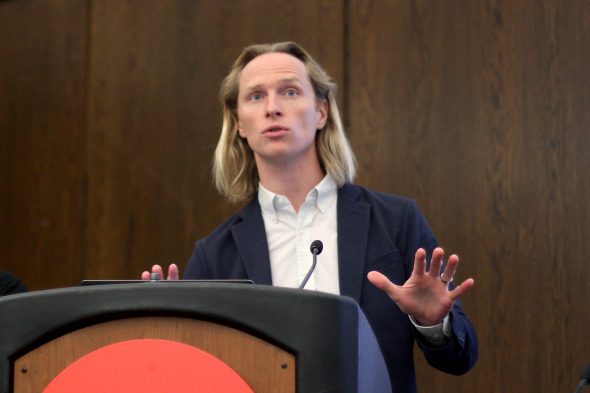 Moira Zellner, research associate professor in the Institute for Environmental Science and Policy and associate professor of urban planning and policy, posed this question to the audience of the final installment of this semester’s Campus Conversation series Nov. 1.

The series, sponsored by the Office of the Provost, is part of a yearlong initiative to engage the UIC community in multidisciplinary discussion regarding pressing national and global issues.

Zellner, one of five panelists at the event, used the Chicagoan’s regular experience with traffic to address her question. A traffic jam results from local interactions of individual cars in relation to one another, which produces congested behavior on a larger scale.

The climate system can also be understood in terms of the local interactions between humans and their environment that shape the global climate.

Discussions about climate change are not new, but people’s attitudes and commitments to the cause are shifting as more research becomes available. The panel sought to re-contextualize and clarify the problem of climate change in relation to its interaction with complex human systems.

Max Berkelhammer, assistant professor of earth and environmental sciences, represented this uncertainty through a graph depicting the wide range of earth temperature projections. The uncertainty is, in part, reflective of the historically volatile nature of the climate system itself, as well as the unpredictability of human nature.

To combat this uncertainty, Berkelhammer, the discussion moderator, proposed three general methods to be considered in different areas of research: attribution, mitigation and adaptation.

Adapting to a global phenomenon like climate change requires an awareness of its impact in various sectors of human life.

Serap Erdal, associate professor of environmental and occupation health sciences, outlined some of the public health ramifications of climate change, which included a decline in respiratory and cardiovascular health, and increased transmission of water-, food- and vector-borne diseases.

Studies in behavioral finance help shed light on the economic responses to climate change, effectively reducing a segment of uncertainty about the human responses to a changing climate.

This coordination problem is amplified when natural disasters expose the direct costs of capital and human life, and the indirect costs of future investment and recovery. In order to address these costs effectively, Wynter stressed, “You need coordination, you need governments, you need aid, you need a team.”

Sybil Derrible, associate professor of civil and materials engineering, also emphasized the importance of an interdisciplinary team willing to accept the risks of new approaches to the development of sustainable infrastructure.

However, the development of infrastructure is not the only answer.

“Whatever we decide to do, there’s going to be costs and benefits,” Zellner said. “And what needs to happen is a conversation where it’s not about getting more data about the problem; it’s really enabling a conversation about what those tradeoffs are and how we are going to deal with them.”