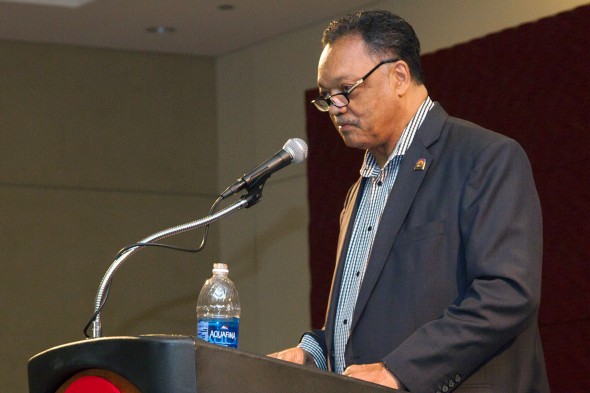 Jackson, sitting in the front row, raised a closed fist high above his head to show his respect for the honor.

“The soul of America is at stake,” said Jackson, who founded Rainbow Push Coalition.

Jackson — speaking to students, faculty and staff in Student Center East — highlighted what he believes are discrepancies between President Donald Trump’s plan, such as increased military spending, and the needs of the American people. He urged the audience to resist Trump’s policies.

He also provided historical context, recounting stories of how Rosa Parks, Medgar Evers and the murder of Emmett Till influenced wide-scale protests and alliances.

“We’ve seen more politics come from the streets than the legislators,” said Jackson, who marched with Martin Luther King Jr. during the Civil Rights Movement.

The discussion — presented as part of the Political Science Speaker Series — had tinges of hope.

“We take from Trump a lesson, not a future,” he said.

He shared his concerns about the dangerous implications of Trump’s presidency.

Jackson has long been a notable public figure in Chicago, so elements of the city’s violent plague were evident in his speech, too. The reverend discussed mass closures of public schools on the west side and lack of middle-class jobs. He also cited Chicago’s segregation, which has been near the nation’s highest for an extended period.

“We survived apart,” Jackson said. “Now we must learn to live together.”

With pressing national and local issues, Jackson offered some words of advice before opening it up to questions from audience members.

“First of all, don’t surrender,” he said. “Deep water does not drown you. You drown because you stop kicking.

“What must we do? We have moved up in some situations because we have the right to vote.”

Some in the audience took his message to heart.

“I’ll vote,” said Demetria Dawkins, a senior in psychology. “I’m registered to vote, but I definitely didn’t vote in the presidential election because I thought it was a joke. There was no one I really wanted to vote for.

“But just listening to [Jackson] speak about how not everybody was given the right to vote, and of course I knew this, but coming from someone of his stature, it’s a lot different.”