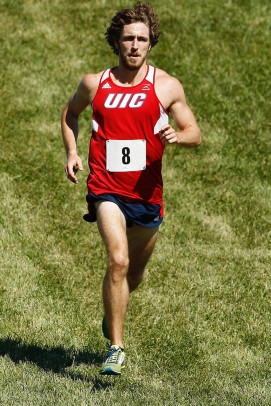 Under a clear blue sky, the men and women’s cross country teams began the 2016 season on a good note Saturday, hosting their opener at Lewis University. In the new dual meet scoring the Flames captured three of six head-to-head races on the women’s side, while the men earned four.

In the women’s 4K event UIC tallied three of the top 20 finishes, led by senior Lizzie Deutsch, who finished second with a personal best time of 15:21, dropping more than a minute off her previous best of 16:26. She was immediately followed by sophomore Allison Hansen at 15:22. Senior Brittany Schwarz placed 17th crossing the stripe with a time of 15:59.

“Lizzie and Allison did a phenomenal job running at the front the entire race,” head coach Jim Knoedel said. “Last year Lizzie finished 37th, but worked very hard over the past nine months. I’m astounded by her improvement.

“We lost three seniors so I knew this would be tough, but I am happy with the performance of our female athletes.”

On the men’s side, the Flames captured nine of the top 22 positions in the 6K run, including the top spot by senior Kyle Hauser. Hauser established a personal record with a time of 19:00, besting his mark of 19:22 set in last year’s opener.

“Kyle demonstrated how good a runner he is, cutting 21 seconds off last year’s time,” Knoedel said.  “He traded leads with another runner and then pulled away the last 1,000 meters like it was a stroll in the park.”

“Our men’s team showed the talent and depth that can take us to the top,” Knoedel said. We focused on running in a pack and had seven in the top 16 finishers. This could be the best team I’ve coached at UIC.”

The Flames will travel to Normal Friday to compete in the Illinois State Invitational.