CSO presentation of ‘Ivan the Terrible’ to feature UIC faculty 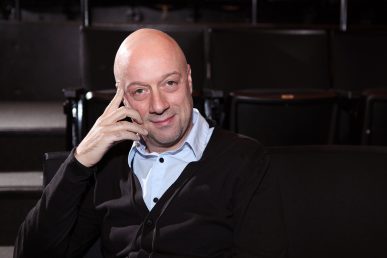 Peyankov, who is based in UIC’s School of Theatre and Music, will serve as narrator, and French actor Gérard Depardieu will perform as Ivan, according to CSO officials. Riccardo Muti will conduct the orchestra and the Chicago Symphony Chorus.

“Ivan the Terrible” was a film collaboration between composer Sergei Prokofiev and director Sergei Eisenstein that details the bloodthirsty tyrant Ivan IV Vasilyevich, tsar of Russia from 1533 to 1584.

Prokofiev wrote the music, while he and Eisenstein discussed each film scene individually, according to CSO officials. Eisenstein delayed completely editing each film sequence until the music was finished.

The Chicago Tribune has called Peyankov “inimitable” as a member of the famed Steppenwolf Theater Company ensemble.

A native of Bulgaria, Peyankov trained in the tradition of Konstantin Stanislavski at the National Academy of Theatre and Film Arts of Sofia and co-founded the European Repertory Company in Chicago in 1992.

He received a Jeff Award, Chicago’s counterpart to the Tony, for his work in “Morning Star,” and was nominated for a Jeff for his translation of Chekhov’s “Ivanov.” His film credits include Robert Altman’s “The Company,” and he has appeared in nine television series, including “The Practice” and “Early Edition.”

In addition to Peyankov, UIC adjunct voice faculty Amy Pickering and Klaus Georg, as well as Ashlee Hardgrave, music programs manager/admissions and recruitment in the department of music, will be singing with the chorus.

Performances will be Feb. 23, 24 and 25 at 8 p.m. at Orchestra Hall, 220 S. Michigan Ave. Before each performance, a 30-minute pre-concert conversation will begin at 7 p.m. in the Grainger Ballroom.