Dr. Gary Slutkin, professor of epidemiology in the UIC School of Public Health and founder and CEO of Cure Violence, has been named a Chicago Humanitarian of the Year by the U.S. Fund for UNICEF.

The award recognizes Chicagoans who have made a significant impact for the lives of children — locally, nationally or internationally. This is the sixth year of the award, which will be presented Sept. 23 to four recipients at a luncheon at the Ritz-Carlton Hotel in Chicago. 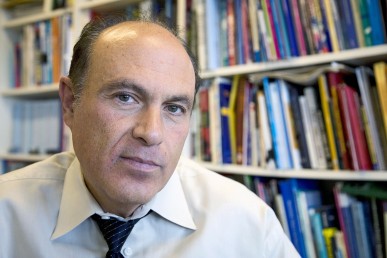 Dr. Gary Slutkin, founder of CeaseFire, in his office at the University of Illinois Chicago.

“I’m deeply honored to receive this award from UNICEF,” said Slutkin. “It’s also a privilege for Cure Violence to be working with the organization on the new Global Partnership to End Violence Against Children. Violence is one of the most pressing public health crises of our time—it behaves like a contagious disease, and there’s an epidemic problem in the U.S. and around the world. Most epidemics are managed by the public health sector. We need to galvanize the public health sector to change the course of the violence epidemic.”

Cure Violence, founded by Slutkin in 1995, uses disease-control and behavior-change methods to reduce violence in communities around the world. Cure Violence works to lessen gang and youth violence, as well as cartel, tribal, election and prison violence and is increasingly being consulted on violent extremism. The organization has partners on four continents, including more than 50 communities in 31 cities.The organization ranks No. 14 in NGO Advisor’s 2016 report of the top 500 NGOs in the world and first among organizations devoted to reducing violence.

Slutkin received his medical degree from the University of Chicago and did his internship and residency at UCSF and San Francisco General Hospital. He served as medical director of the tuberculosis program for the San Francisco Health Department from 1981 to 1985, where he learned infectious disease control methods. He moved to Somalia to work on tuberculosis and cholera epidemics in refugee camps for two years, then served the World Health Organization’s Global Programme on AIDS for seven years, where he supported the program in Uganda—the only country to have reversed its AIDS epidemic.

The U.S. Fund for UNICEF (https://www.unicefusa.org/) supports UNICEF’s work and other efforts in support of the world’s children, through fundraising, advocacy and education in the United States. The Fund works with governments, civic leaders, celebrities, corporations, campus groups, churches and teachers to help advocate for the survival and well-being of every child.