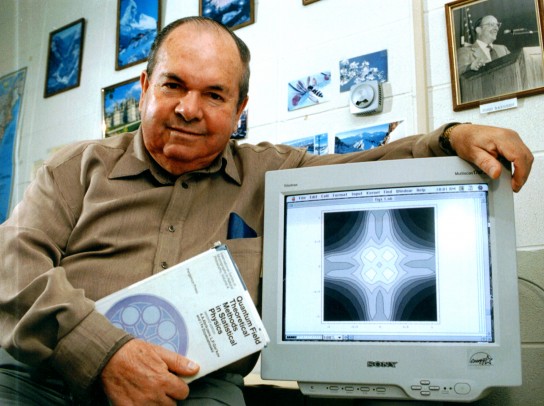 Alexei Abrikosov, adjunct professor of physics and physicist at the U.S. Department of Energy’s Argonne National Laboratory, died March 29. He was 88.

Abrikosov, who received the 2003 Nobel Prize in Physics for his work on superconducting materials, proposed the theory that helps scientists understand “type-II” superconductors, which are instrumental to technology that affects virtually all areas of life and science, including MRI machines, particle accelerators and cell phone towers.

Superconductors are a peculiar but extremely useful class of materials that are able to conduct electricity perfectly – with no loss at all – when cooled to extremely low temperatures.

Until 1952, scientists only understood one type of superconductors, whose properties vanished under a sufficiently strong external magnetic field. That year, Abrikosov developed a theory that showed that magnetic fields could penetrate a superconducting material to create a network of vortices, while the material itself remained superconducting.

The discovery of this vortex behavior – now known as an Abrikosov vortex lattice – allows scientists to develop superconducting materials that carry far higher currents and thus able to generate much higher magnetic fields.

Abrikosov was born in Moscow in 1928, and received his Ph.D. in 1951 from the Institute for Physical Problems. He worked at several institutes in Moscow, including as director of the Institute for High-Pressure Physics of the Academy of Sciences, before joining Argonne’s Materials Science Division as a Distinguished Scientist in 1991. He became leader of Argonne’s condensed matter theory group in 1992 and held the position until 2000, though he continued to work there until last year.