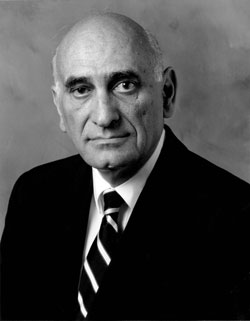 Antonio Scommegna, former chairman of the obstetrics and gynecology department, died March 26. He was 85.

An expert in reproductive endocrinology and infertility, he trained more than 200 residents and 30 fellows during 30 years of heading residency programs and chairing obstetrics and gynecology departments at UIC and Michael Reese Hospital.

He was born in Italy and came to the United States as a Fulbright Scholar in 1954, after receiving a medical degree from the University of Bari, Italy. He interned at the New England Hospital in Boston, then moved to Chicago for a residency in obstetrics and gynecology at Michael Reese Hospital, where he practiced medicine and conducted research for 34 years.

He invented the first hormone-releasing IUD, Progestasert, patented in 1974 and received the Benjamin Franklin Medal for Population Research the same year.

Scommegna joined UIC in 1989 and helped build the department from three to 30 full-time academic faculty members.

He established UIC as the leading institution in women’s health care, including the first in vitro fertilization program in the city of Chicago, said current department head Mary Stephenson.

At UIC, he established departmental guidelines for patient care, as well as quality of care and faculty leadership committees.  He, along with the School of Nursing, established the UIC Nurse Midwifery Program.

Since 2005, the obstetrics and gynecology department has held the yearly Antonio Scommegna, MD Symposium in his honor.

He retired as department head in 1999 and became professor emeritus.

“His accomplishments were numerous and provided the foundation for the excellence of many of our present programs,” Stephenson said.

After retirement, he cultivated grapes and bottled wine at a small vineyard in southern Wisconsin.

He is survived by his wife of 59 years, Lillian (Sinkiewicz) Scommegna, three children and five grandchildren: Paola Scommegna and Paul Nelson, Renata and Theodore; Frank and Aileen (Bergen) Scommegna and Antonio; Roger and Pam (Charles) Scommegna, Nicole and Kristen.