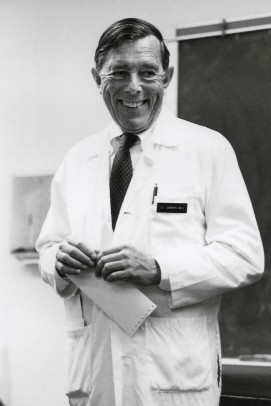 John S. “Jay” Garvin, professor emeritus and founding head of the neurology department at the UIC College of Medicine.

John S. “Jay” Garvin, professor emeritus and founding head of the neurology department at the UIC College of Medicine, died Nov. 28 from heart complications. He was 95.

Garvin was a highly regarded physician and educator, making lasting contributions to the field of neurology.

“Dr. Garvin was to become one of the most gifted neurological clinicians in America and among the first academic university-based neurologists in Chicago,” James Stone, Garvin’s former student and current chief of neurosurgery at Manhattan Veteran’s Administration Hospital and professor of neurosurgery at New York University Medical Center. “He displayed ideal temperament and represented the highest ethical conduct and professionalism imaginable.”

Born in 1921 in Windsor, Illinois — a small farming community about 200 miles south of Chicago — Garvin earned his A.B., B.S. and M.D. degrees from the University of Illinois. After graduating in 1945 and a residency at the Illinois Neuropsychiatric Institute, he was a captain in the U.S. Army Medical Corps from 1946-48, specializing in neuropsychiatry. He then spent a year in England as a Fulbright Fellow at the prestigious National Hospital, Queen Square, London.

Upon returning to Chicago, he held a number of neurology teaching and clinical positions at the University of Illinois during the next several decades, and was senior attending neurologist and consulting neurologist at several Chicago area hospitals including Presbyterian/St. Luke’s, St. Francis, Mercy and the Veteran’s Administration West Side Hospital.

Named head of newly created UIC College of Medicine’s department of neurology in 1970, a position he held
for the next 18 years, Garvin helped the department emerge as one of the nation’s premier academic neurology programs with an emphasis on treating epilepsy, neuromuscular diseases, strokes and neurologic diseases in children. A highly skilled clinician and teacher, Garvin was recognized in his long tenure and profession as the “neurologist’s neurologist” and often treated his fellow doctors.

In 1996, his sisters, Eleanor Skinner and Mary Ann Coleman, endowed the John S. Garvin Professorship of Neurology, currently held by Dr. Jeffrey Loeb, head of neurology at the UIC College of Medicine.

“Dr. Garvin and his family have created a lasting legacy in Chicago that will support outstanding neurological education, cutting-edge research, and compassionate clinical care for patients with neurological disorders for years to come,” Loeb said.

Services have been held.

Donations in Dr. Garvin’s memory can be made to the University of Illinois College of Medicine Department of Neurology and the Kenilworth Union Church.