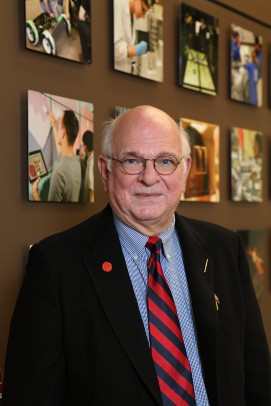 Each year, UIC honors some of its most dedicated and outstanding teachers with the Award for Excellence in Teaching. The winners, who receive a $5,000 salary increase, are selected by past recipients of the award from nominations made by departments and colleges.

Michael Stroscio believes in a heavy course load – for himself, as a teacher. He regularly teaches four to five courses a year, not the usual three for a professor who performs service and research in the UIC College of Engineering.

He manages — and excels — by taking an interdisciplinary, team-oriented approach to his teaching as well as his engineering research.

As the Richard and Loan Hill Professor and UIC Distinguished Professor of electrical and computer engineering and of bioengineering, Stroscio has graduate and undergraduate students from both departments working in his laboratory on three or four different grants at one time. He melds these diverse students into research teams to collaborate on projects that use quantum dots — nanocrystals with extraordinary optical and electrical properties that attach to cellular receptors and appear as light under a microscope.

“We meet as a group and got in the practice of inviting undergraduates to our meetings, and they form teams,” said Stroscio, who came to UIC in 2001 after holding a variety of positions in federal agencies and national labs.

“The teams are interdisciplinary, including students from ECE and bioengineering and sometimes from physics, all working together,” he said. “It’s good training for undergraduates and graduate students, because that’s what research in engineering is about.”

His previous graduate students now work at Intel, General Motors, Motorola, the U.S. Patent and Trademark Office and Columbia, Northwestern and Washington universities, among others.

“If there’s anything distinctive about my classroom teaching, it’s that it tends to be interdisciplinary, and it tries to help students make the transition between the classroom and the lab,” he said.

“A lot of the material is based on the current literature,” Stroscio said. “Being in two departments also helps me a lot. There’s a synergism between the research done in each department, and the students like that.”

Stroscio has authored more than 400 publications and three books, and he has edited four other volumes.

“The books have been essential aids in my teaching at the junior, senior, and graduate level,” he said.

Stroscio and his coworkers have used quantum dots capped with specialized peptide sequences to bind integrins — receptor molecules embedded in the cell membrane that conduct cell-to-cell signals and communication with the extracellular matrix — in fibroblasts and stem cells. His research in nanostructures, including quantum dots, quantum wires and quantum wells, has resulted in a dozen patents and several disclosures.

Stroscio has served on a number of National Science Foundation panels and reviews, and he was facilitator at UIC for the Women in Science and Technology System Transformation (WISEST), supported by an NSF advance grant. He has been a finalist for the Silver Circle teaching award and the College of Engineering teaching award.