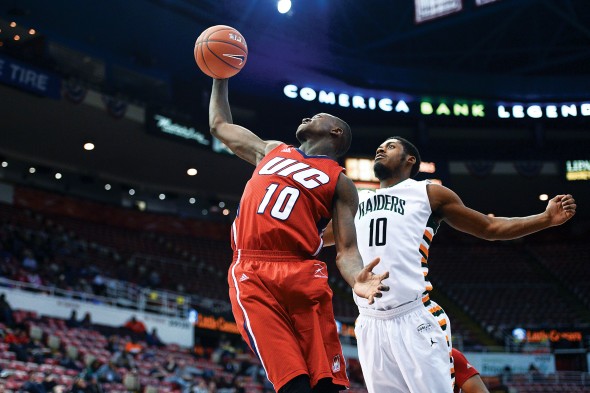 Sophomore Dikembe Dixson is among 20 small forwards nationally who are being considered for the Julius Erving Award. — Photo: Jose Juarez

UIC sophomore Dikembe Dixson has been named to the 20-member watch list for the 2017 Julius Erving Small Forward of the Year Award. Named after Hall of Famer and 11-time NBA All-Star Julius Erving, the annual honor in its third year recognizes the top small forwards in Division I men’s basketball.

Dixson was unanimously named the Horizon League Freshman of the Year in 2016, while also capturing All-League honors. He set the conference’s scoring record for a first-year player by pouring in 594 points. The Freeport native ranked third in the Horizon League in scoring with 19.8 points per game. In contests against conference teams, Dixson’s average jumped to 23.3 points per night, putting him in a tie for first among all league scorers. He contributed on the glass with a team-high 7.3 rebounds per night and his seven double-doubles ranked seventh in the Horizon League last year.

Earlier this month, Dixson was among five players chosen for the Preseason All-Horizon League First Team. He was one of two Flames to start all 30 games during the 2016-17 season, and he scored in double figures in 26 of those games.

Dixson was the only player in the Horizon League to be named to the Erving Award watch list, and one of just five underclassmen on the list.

Erving attended the University of Massachusetts and averaged 26.3 points and 20.2 rebounds per game, making him one of only six NCAA men’s basketball players to average more than 20 points and 20 rebounds per game. During his professional career, Erving won three championships, four Most Valuable Player awards and three scoring titles. In 1996, he was named a member of the NBA’s 50th Anniversary All-Time Team.

“These student-athletes have worked tirelessly to earn their places on this elite watch list and I know they will continue to improve throughout the season,” said Erving, a 1993 inductee of the Naismith Memorial Basketball Hall of Fame.

By mid-February, the watch list will be narrowed to 10. In March, five finalists will be presented to Erving and the Hall of Fame’s selection committee. The winner will be honored at the ESPN College Basketball Awards in April.