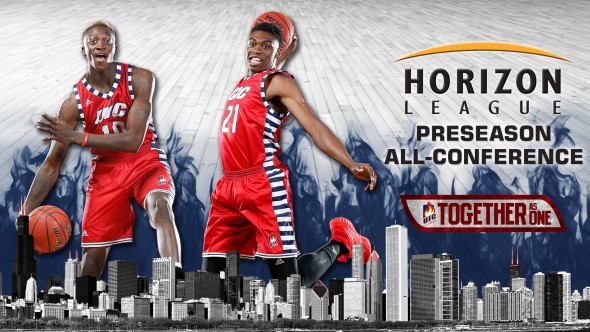 The conference unveiled the predicted order of finish for the upcoming 2016–17 campaign. The buzz surrounding the program is palpable and with a tremendous mix of talented returners and exciting newcomers in the fold, the Flames were selected to finish fourth in the Horizon League.

Following a sensational freshman season, Dixson was one of five Horizon League standouts selected to the Preseason All-Horizon League First Team. In his first act, the Freeport, Illinois, native was unanimously chosen as the League’s Freshman of the Year, while also earning a spot on the All-Horizon League Second Team. Dixson scored 594 points, more than any first-year player in conference history. Overall, he ranked second in the league in scoring with 19.8 points per game and seventh in rebounding with 7.3 per contest. Dixson also finished second in the Horizon League in minutes, averaging 36.7 per game.

Dixson was one of two Flames to start all 30 games during the 2015–16 season and he scored in double figures in 26 games. He led the team with seven double-doubles while setting UIC single-season records in both free-throws made (169) and free-throw attempts (256). The forward set another Horizon League record by earning Freshman of the Week plaudits nine times, including on five occasions during conference play.

Dixson became only the second player in program history to score at least 40 points in a game, joining Chuck Lambert, during a double-overtime thriller at Youngstown State Feb. 16.

Odiase’s 97 rejections a year ago were the second-best single-season total in program history. Through only two seasons, the Glenwood, Illinois, native ranks fifth all-time in Flames history with 145 blocks.

Odiase, the other member of UIC’s roster to start all 30 games last season, ranked second on the team in both scoring (9.5 points per game) and rebounding (6.4 rebounds per game) behind Dixson.

The first chance to see UIC in action will be in an exhibition game Nov. 5. The home opener is slated for 7 p.m. Nov. 16 against the University of Texas at San Antonio.