Vice Provost for Global Engagement and associate professor of history

When Neal McCrillis began researching 20th century British history, he noticed that no 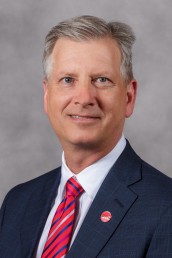 major studies had ever been published on the British responses to the arrival of U.S. personnel during the First World War, 1914-18. Although many scholars had explored the arrival of U.S. personnel during World War II, McCrillis was curious about the earlier conflict, which was the first occasion for large numbers of U.S. troops and citizens to visit Britain or Europe. He has presented papers in the U.S. and the U.K. and is working on a book based on his research examining the British response to America and Americans in Britain during the Great War.

The Vice Provost for Global Engagement – who also is a scholar of British and 20th century European history — has had a very successful tenure leading university internationalization efforts in a number of different capacities, including study abroad, international programming, faculty seminars and visiting scholars.