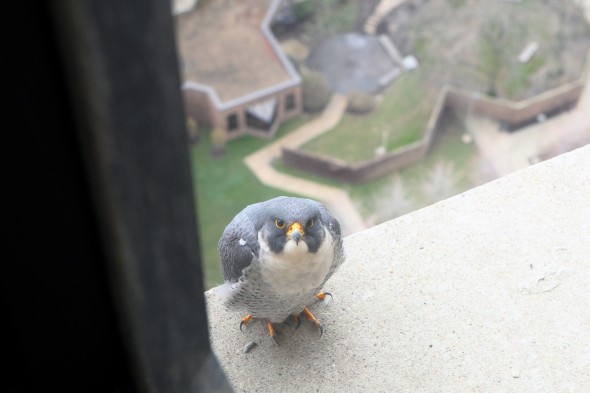 The pair are peregrine falcons, a species of bird that has called UH home for more than 30 years. Known to soar over campus grounds in spring and summer months, the birds can dive at more than 200 miles per hour from above to catch their prey, which can be anything from insects to medium-sized mammals.

“It’s great that they’re back,” said William Bradford, project manager in the Office for Capital Programs.

UIC’s first peregrine chicks, which were captive-born, were released on campus in the 1980s, after falcons were classified as an endangered species. Since then, about 36 eggs have hatched at UIC — incremental steps toward a larger achievement. In 1999, the falcons were removed from the federal list of endangered and threatened species. In 2015, they were removed from the state Endangered and Threatened Species List, too.

But the birds of prey are still an important part of the metropolitan area’s ecosystems, one reason why university personnel are taking extra measures to protect them.

“Before construction started, actually before we even got a contractor on board, we met with Mary Hennen, the director of the Chicago Peregrine Program who really monitors all the peregrine falcons throughout the Chicago area, to try to understand the mating and nesting habits of the falcons,” Bradford said. “This was communicated during the bidding process with the contractors.”

Hennen, who is based at the Field Museum, also visited construction crews to explain, in more detail, the habits of the birds and what to expect while the falcons are on site.

Bradford and his team have been working with contractors to ensure that crews will avoid the southwest corner of UH, where the female peregrine has started to prepare her nest, from now until June, the courting and nesting time periods for peregrines. For now, construction crews will focus on completing work on the east side of UH.

“After July, work will move back to the west side of the building, and we’ll be working north to south,” said Bradford. “We’re trying to avoid the southwest corner for as long as we possibly can.”

When construction is done, Bradford hopes to have new windows installed near the ledge to give Field Museum experts easier access to the birds. Nesting boxes, made with fiberglass trays and river rock, will also be made available to birds.

Hennen has not confirmed whether the birds are Nitz and Mouse, a pair that has nested on the ledge for the past four years.

“It’s not something that I can see from the nest camera,” said Hennen, explaining that each bird has a band on its leg that is used as an identifying marker by naturalists, researchers and falcon fans. Hennen plans to visit when the bird has laid an egg. If either bird is new to the site, the egg-laying stage could take longer.

“You may have an inexperienced bird in the breeding process, so people shouldn’t panic if they don’t see an egg,” she said. “That doesn’t mean they’re not nesting.”

Watch the birds live on the UIC FalconCam.