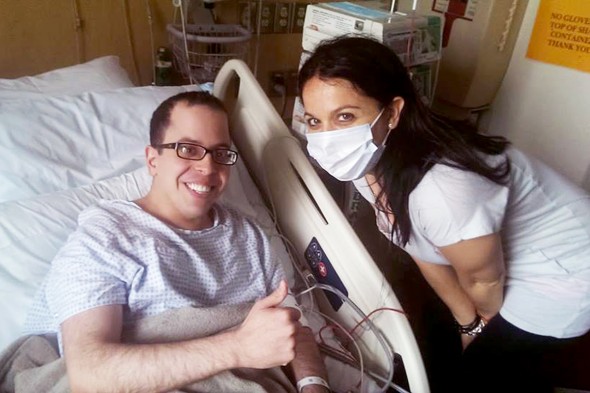 David Levy, pictured with his sister, is the first patient known to be cured of congenital dyserythropoietic anemia, a rare blood disorder.

Using a technique that avoids the use of high-dose chemotherapy and radiation in preparation for a stem cell transplant, physicians at the University of Illinois Hospital & Health Sciences System have documented the first cure of an adult patient with congenital dyserythropoietic anemia. CDA is a rare blood disorder in which the body does not produce enough red blood cells, causing progressive organ damage and early death.

The transplant technique is unique because it allows a donor’s cells to gradually take over a patient’s bone marrow without using toxic agents to eliminate a patient’s cells before the transplant.

Damiano Rondelli, the Michael Reese Professor of Hematology, said the protocol can be used even in patients with a long history of disease and some organ damage because of the minimal use of chemotherapy.

“For many adult patients with a blood disorder, treatment options have been limited because they are often not sick enough to qualify for a risky procedure, or they are too sick to tolerate the toxic drugs used alongside a standard transplant,” said Rondelli, who is also division chief of hematology and oncology and director of the stem cell transplant program at UI Health.

“This procedure gives some adults the option of a stem cell transplant which was not previously available.”

For more than 30 years, Northbrook resident David Levy’s only course of treatment for CDA was regular blood transfusions to ensure his organs and tissues received enough oxygen. Levy was 24 when the pain became so severe that he had to withdraw from graduate school.

“I spent the following years doing nothing — no work, no school, no social contact — because all I could focus on was managing my pain and getting my health back on track,” Levy said.

By age 32, Levy required transfusions every two to three weeks; had lost his spleen; had an enlarged liver; and was suffering severely from fatigue, heart palpitations and iron poisoning, a side effect of regular blood transfusions.

“It was bad,” Levy said. “I had been through enough pain. I was angry and depressed, and I wanted a cure. That’s why I started emailing Dr. Rondelli.”

Rondelli said that because of Levy’s range of illnesses and inability to tolerate chemotherapy and radiation, several institutions had denied him the possibility of a stem cell transplant. UI Health’s advances in curing sickle cell patients opened up a new possibility. Rondelli performed Levy’s transplant in 2014.

“The transplant was hard, and I had some complications, but I am back to normal now,” said Levy, now 35. “I still have some pain and some lingering issues from the years my condition was not properly managed, but I can be independent now. That is the most important thing to me.”

Levy is finishing his doctorate in psychology and running group therapy sessions at a behavioral health hospital.

Rondelli said the potential of this approach to stem cell transplantation is very promising.

“The use of this transplant protocol may represent a safe therapeutic strategy to treat adult patients with many types of congenital anemias — perhaps the only possible cure,” Rondelli said.

This case report is published in a letter to the editor in the journal Bone Marrow Transplantation.