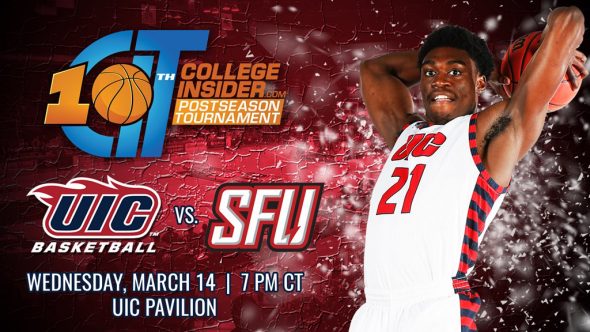 For the second consecutive season under head coach Steve McClain, the UIC Flames have been invited to play in the postseason.

UIC (17-15, 12-6 Horizon League) will participate in the 10th CollegeInsider.com Postseason Tournament (CIT). The Flames will host a first-round game at 7 p.m. March 14 versus Saint Francis (PA) at the UIC Pavilion.

Tickets are free for students with i-card. Faculty and staff can reserve two free tickets using the code “STAFF” online. General admission seats in the lower bowl will be available for $5, and floor seating is available for $20. For information, call the UIC Ticket Office at 312-413-8421.

“Everyone in our program is honored and excited at the opportunity to extend our season,” McClain said. “To be able to go to the postseason two seasons in a row for the first time in 14 years is truly special and something our players worked hard to achieve. We’re fortunate to be playing deep into March for the second year in a row, and I think we all saw last year how these events can serve as a solid springboard into the next year.”

The Flames are playing in the postseason in back-to-back years for the first time since the 2002-03 and 2003-04 seasons, when the program went to the NIT and NCAA Tournament in consecutive campaigns. This is the seventh time that UIC has accepted a postseason bid, and the second time playing in the CIT. The Flames went 1-1 in the 2013 CIT, and the first-round win over Chicago State on March 20, 2013 was the first postseason win in program history.

Saint Francis, which plays in the Northeast Conference, finished the regular season with a record of 18-12.

The Red Flash had two players start all 30 games during the 2017-18 season — Jamaal King and Keith Braxton. King was the team’s top scorer at 18.3 points per game, while Braxton poured in 17.4 points. Braxton nearly averaged a double-double with a team-best 9.7 rebounds per game.

The CollegeInsider.com Postseason Tournament is a single-elimination tournament consisting of five rounds. All games are played on campus sites, which will be determined by seeding. For the first time in tournament history, all 2018 CIT games will be televised on CBS Sports Network and CBS Digital.