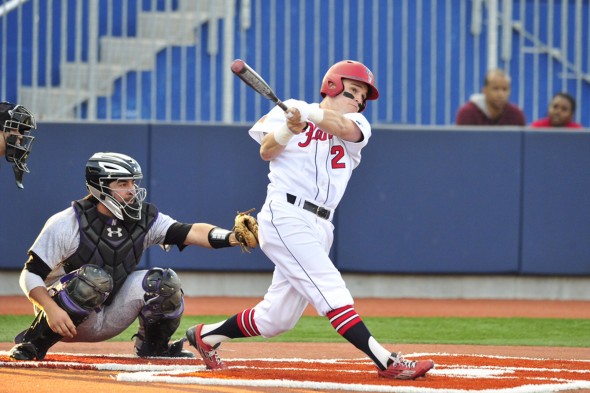 UIC (19-23, 11-7 Horizon League) pounded out a combined 26 hits Sunday to come away with a doubleheader sweep at Valparaiso (20-20, 11-7 HL). The Flames captured the season series, 3-2, and took over sole possession of second place in the Horizon League standings.

Ian Lewandowski tossed eight solid innings of six-hit baseball and tied his career high with seven strikeouts but did not earn a decision in the game one win. David Cronin wrapped out four hits, tying his career best and scored two runs. The Flames jumped on Valparaiso from the onset as Cronin laced a two-out double to left and scored on a single to center field by Ricardo Ramirez to take a 1-0 lead in the first inning. UIC added two more in the fifth inning courtesy of a Brandon Gibis RBI triple and a Scott Ota sacrifice fly to take a 3-0 advantage.

Valparaiso scored three times in the bottom of the fifth inning to knot the game at three each on a two-run single from Daniel Delaney. Delaney was the last hitter to reach base in the game as Lewandowski retired the next 10 batters in a row before turning it over to Trevor Lane in the ninth inning. Lane (6-4) earned the victory with two perfect innings, retiring all six batters faced.

The Flames struck quickly in the top of the 10th with a leadoff single to center field by Cronin. The redshirt sophomore stole second base and advanced to third on the catcher’s throwing error. With two and Cronin at third base, Gabe Dwyer singled to right for the game-winner.

Schulewitz pitched out of a jam in the first inning getting Valparaiso to bounce into an inning-ending double play. The right-hander induced 14 ground ball outs (two double plays) and three fly ball outs.

UIC used a safety squeeze to plate their first run of the game in the sixth inning. Conor Philbin led off the inning with a double and moved to third base on a sacrifice bunt by Alex Dee. The next batter Cody Bohanek placed a perfect sac bunt down the first base line as Philbin scored. The Flames plated three more runs in the seventh courtesy of a two-run single from Alex Dee and an RBI single from Bohanek.

UIC will step out of conference for its final non-conference game Wednesday night, hosting Northwestern at Curtis Granderson Stadium. The Flames won the first two meetings against the Wildcats and look for the three-game sweep. First pitch is slated for 6:05 p.m.