Gallery 400 exhibit explores effects of climate insecurity across the planet 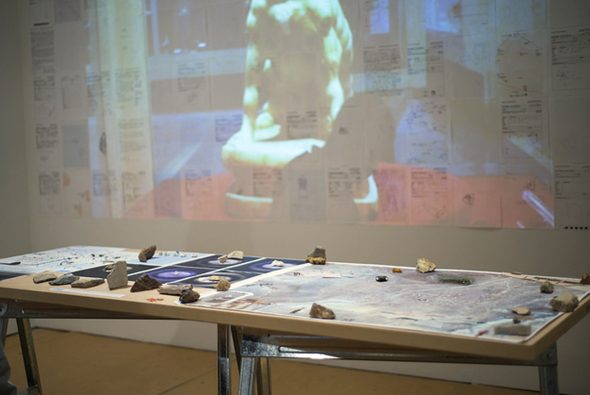 “All have the same breath,” a multimedia exhibition at Gallery 400 on the University of Illinois at Chicago campus, will continue through March 9. (Photo: Kiam Marcelo Junio)

For two years, anthropologists, archeologists, art historians, artists, geographers and scientists have been sifting through the muck of environmental politics and bringing to light how the changing climate is affecting people and cultures across the world.

The effort of the teams involved in this interdisciplinary, collaborative project puts a spotlight on the lived realities of those who are having to cope with changing landscapes and altering climates.

Their work is on display in “All have the same breath,” a multimedia exhibition at Gallery 400 on the University of Illinois at Chicago campus that will continue until March 9.

“Moving beyond the usual rhetoric of climate change, the exhibition raises urgent questions about how the global environmental crisis is experienced and articulated by rural and urban communities,” according to the curators. “‘All have the same breath,’ investigates and visualizes the material entanglements, debates, discourses, and intellectual engagements in a variety of urban and rural environments.” 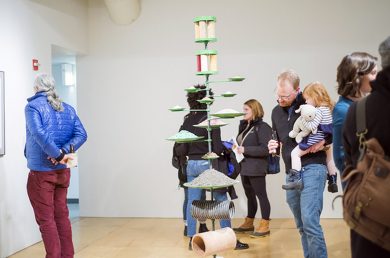 “All have the same breath,” at Gallery 400. (Photo: Kiam Marcelo Junio)

The exhibit includes seven field projects around the world that engaged with a distinct field site and its communities with their local histories, narratives and conditions. Among the sites was the Hunza Valley in northern Pakistan; the historic Tarlabaşı neighborhood in Istanbul, Turkey; Cochabamba, Bolivia; and even Bhutanese neighborhoods in Chicago.

Teams of artists who participated in the “fieldwork” created artworks that make observations about our relationships to the land and how these relationships are influenced by external forces.

Among the efforts, one team referenced humans’ earliest map-making impulses and how mankind used cartography to claim and define the world in which they lived; another artist explored the conditions of farming in Northern Illinois and the fight to keep the land farmable; and other artists considered the nature and ethics of conducting research on the land and people.

According to the curators, the title, “All have the same breath,” hearkens back to the Old Testament, where “breath” refers to the air we breathe as well as “nothingness, futility” as a metaphor to dramatize the shared fortunes and misfortunes of living beings.

“Breathing, as the most fundamental, most intimate, and therefore perhaps the most poetic bodily function, unites all living beings in their sharing of the same air — the least valued substance of all earthly resources,” according to the curators. “A metaphor for both hope and vanity, air could, in the ideal, be imagined as an atmosphere of democracy or, conversely, stand in for the uselessness of human deeds.”

Major support for “All have the same breath” is provided by the Humanities Without Walls consortium, based at the Illinois Program for Research in the Humanities at the University of Illinois at Urbana-Champaign.

The Humanities Without Walls consortium is funded by a grant from the Andrew W. Mellon Foundation. Additional support both to this project and the Political Ecologies Working Group is provided by the UIC Institute for the Humanities. Additional support is provided by UIC’s School of Art & Art History and the College of Architecture, Design, and the Arts, as well as the Andy Warhol Foundation for the Visual Arts and a grant from the Illinois Arts Council.