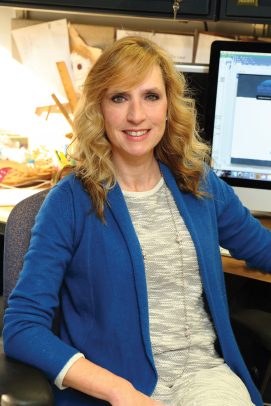 Kimberly Lawless, associate dean for research in the College of Education, believes that science literacy is a tool, and like any tool, be it a hammer, screwdriver or wrench, you need to learn what it is, what it does and when to use it.

“If you go through the world thinking that you only have a hammer, the only thing you can do is hammer,” said Lawless, professor of educational psychology. “But if you go through life with a complement of tools and you are able to fluidly mix and match those tools to the job that’s in front of you, you’re going to better accomplish the job.”

Her research — which has garnered more than $30 million in grants and contracts during her time at UIC and has led to more than 50 referred journal articles and book chapters in the past 10 years alone — focuses on educational technology with an emphasis on
seventh-grade and eighth-grade students.

While many in the United States believe that as a nation, not enough students are going into the fields of science, technology, engineering and math (STEM), Lawless believes we have a secondary and potentially more critical issue facing our nation — the need for a scientifically literate citizenry.

Her research focuses on leveraging technology to integrate science education into the humanities, such as social studies. She focuses much of her research on how teachers can use technology and real-life examples from their communities to keep their students interested in science.

“Something around upper middle school happens and then they’re, ‘I’m not a math person, I’m not a science person,’ and it really washes kids out of the pipeline before they really get in it,” Lawless said.

Among her current research projects, she is serving as the principal investigator on two collaborative projects between UIC and the University of Connecticut that focus on using technology mediated, problem-based learning simulations to capitalize on the multidisciplinary nature of social studies to learn and apply science.

The project calls for students to use technology to communicate and work with each other to come up with solutions to real issues threatening the world, including global climate change as well as water and food scarcity issues. The project, which has influenced the learning of 7,000 students as well as their teachers, has led to benefits to all the students, but especially among students in urban settings.

“I want kids to love learning again and I want them to understand that having the fundamental tools of scientific literacy are tools that they can leverage for their use in their lives,” said Lawless, adding that receiving the Distinguished Researcher Award is an honor.

“Knowing that this community that I work in values what I do and sees that it’s supporting the mission of the university, makes my everyday job even better than it already is.”