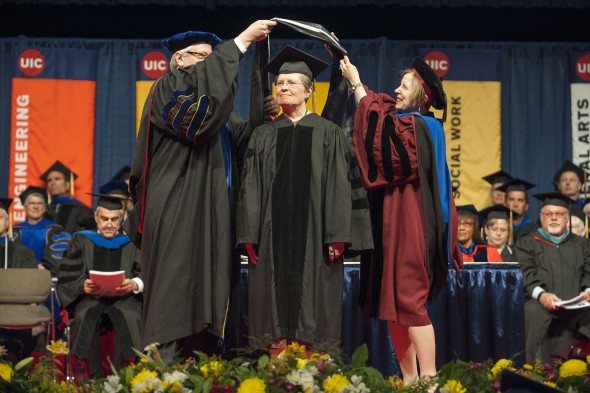 Cheryl Ganz is celebrated with an honorary degree at Commencement in May. ­(Photo: Joshua Clark)

When Cheryl Ganz was told she would receive an honorary degree from UIC, it was one of the few times in her life that she was speechless.

“It was an incredible honor,” said Ganz, who earned her Ph.D. in history from UIC in 2005. “Not just because I’m a UIC graduate — I love the school, I believe in the school and its mission — but because I was nominated by peers and people whom I respect.”

Leading scholars and administrators from the university nominated Ganz because they were aware of her work, publications and blazing career path. Around the time of her nomination, Ganz had retired from her position as chief curator of philately at the Smithsonian National Postal Museum, where she worked with teams to create the world’s largest postage stamp gallery. It was the first time postage stamps were put in the context of history, politics, economics and social culture, setting new international standards for museum postage stamp exhibits.

UIC recognizes leaders like Ganz with honorary degrees, the university’s highest award granted for outstanding service in one or more of three areas: contributions to the scholarly or professional world, contributions to public service, or commitment to UIC. The UIC Senate seeks nominations through Dec. 1.

Honorary degrees strengthen links between recipients and the university, but having a relationship with UIC isn’t required for the nomination.

The award lets recipients know “what they’ve achieved in life is something that we agree with,” said William Bike, former chair of the Senate External Relations and Public Service Committee. “It lets that person know that we understand the accomplishments that they’ve made in their career and that we recognize them and honor them, and it’s simpatico in that the institution of UIC has similar values to this individual.”

The UIC community is encouraged to nominate individuals because “the people here — the faculty, the administration and the staff — they know who’s doing the path-breaking work in their various fields,” Bike added.

The UIC Senate received eight nominations last year. Recipients are selected by the senate and approved by the chancellor, university trustees, advisers and university president.

Ganz was chosen to receive a doctor of humane letters at the Spring 2016 commencement ceremony for the College of Liberal Arts and Sciences. She’s among more than 130 outstanding individuals awarded honorary doctorates since 1966.

“I would say [my ties to UIC] were very strong,” Ganz said. “Now, they’re about as strong as they can be.”