I am UIC: English 311 and a mini-Broadway show 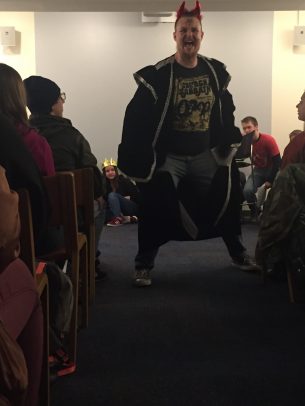 English is not simply about reading. English 311: Medieval English Literature presented faculty, staff and students with an enjoyable play, “The Harrowing of Hell.”

Professor Alfred Thomas collaborated with students from his Tuesday and Thursday class to act in the play for extra credit.

The event was held Oct. 31 in the lower level of Stevenson Hall. The students appeared in different costumes as they portrayed the characters in the story. They spoke in Middle English in a high and vibrant tone.

One of the main characters, D’Jack Alkire, who acted as the devil in the story, discussed his excitement about the play and his character.

“I was excited to participate in this play because this is not my first time working with Professor Thomas. Even without him offering the extra credit I would still participate,” said Alkire.

Melanie Pina, a senior in English, said acting in the play helped her socialize with other students.

“The best part of actually doing this was having the opportunity to interact with the students in my class, and it was also a way to get out of my comfort zone,” said Pina.

Some students were part of the audience, and they respectfully watched their peers perform. The room was crowded but the student actors took advantage of the space, leaving the audience astonished and entertained. 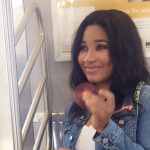 Temitope Eddna Odedoyin is majoring in English and fully concentrating in media and professional writing. Apart from writing, she has have a passion for painting, and enjoys using watercolors, oil paint, acrylic, charcoal, oil pastel. She also has an interest in creative writing and short stories. She believes that art — through writing and painting — is a way of expressing one’s feelings.