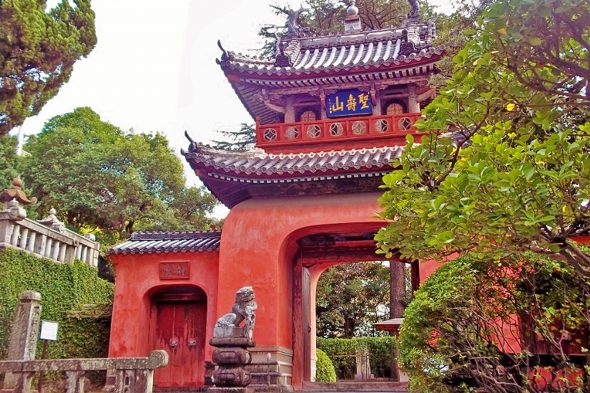 A highlight of Julia Awawdah-Garcia’s study abroad in Japan was a visit to Sofukuji Temple.

Since I was young, I’ve always liked the pop culture, food and the traditional attributes that are still vividly present in modern-day Japan. As I’ve grown older, the desire to learn even more about this country grew, as well. Realistically, my desire alone couldn’t take me there. Many who aspire to go abroad undeniably face the similar issue of, “How am I going to pay for this?” When I saw program costs, I flatly told my study abroad advisor there was no way this was going to happen, and I let go of the idea of going. Let’s be real — I take out loans to pay for school just like many other students. The reality was that I simply could not afford this adventure. Nonetheless, my advisor encouraged me to pursue another avenue: scholarships. I had never pursued scholarships — I didn’t have straight As, but I possess a desire to learn, gain knowledge and share what I know with others. 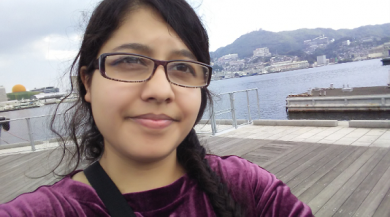 Thanks to the Benjamin A. Gilman Scholarship, I went halfway across the world last fall to Nagasaki, Japan, and created life-long relationships with students at my university in Japan. As a Hispanic, low-income student, I was able to go because of support from the Gilman scholarship.

Many students think that study abroad isn’t for low-income students, but if one looks in the right places, it’s possible for anyone.

The Association of International Educators (NAFSA) reports that 5.9 percent of African-American/Black, 8.4 percent of Asian/Pacific Islander, 9.7 percent of Hispanic/Latin American and 3.9% multi-racial U.S. students studied abroad in the 2015-2016 year. This is a considerably low percentage of students of different ethnic backgrounds. Students of all backgrounds should pursue study abroad for their future, understanding of diversity and their own personal growth.

I learned many things in Japan that made me grow immensely as an individual. I joined a conversation partner program, where I had the opportunity to learn Japanese, helped my friends learn English, and made many more wonderful friends who taught me about Japanese culture. I also visited landmarks, shrines and other beautiful places in Nagasaki that are rich in history. Days before I departed back to the United States, I went to Peace Park, a park that’s filled with many statues donated by other countries as a symbol of peace, and the Atomic Bomb Museum.

This was a very important trip for me to make, as I believe most of the Western world has labeled Nagasaki as the place that was impacted by a nuclear weapon. I wanted to learn more about this event in history and share with others that although Nagasaki’s history is inevitably enveloped by the A-bomb, this city’s history and culture goes beyond that — from Japan’s first international trade port, which created a strong Dutch presence there, to Sofukuji Temple, a 400-year-old temple that is still taken care of to this day, and so much more.

Study abroad isn’t only the adventure of a lifetime, but the opportunity to learn from others and the diverse world around you. Don’t let the costs impede you before you try.