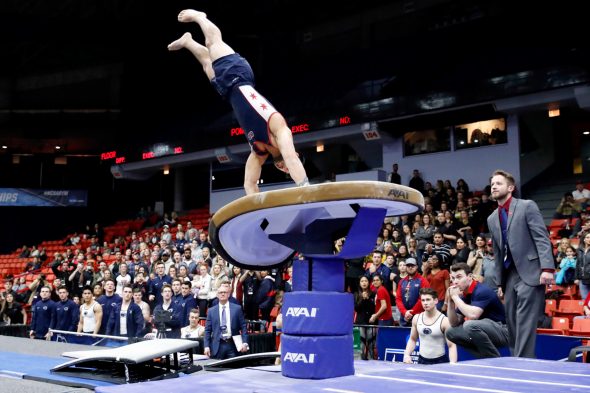 “My feet slipped on the board.”

In front of a vocal crowd on his home floor, Jooma competed in the vault at the NCAA Championship Finals at UIC Pavilion Saturday. He seemed to execute his maneuver in the air, but with his timing thrown by a split second on his launch, he stumbled on landing and scored 13.233.

“Asad’s vaults all season have been on par with the best in the nation,” head coach Charley Nelson said.  “The same environment he thrived in last night in our home arena might have added some extra pressure tonight, especially since he had to wait so long before competing. Vault is such an explosive event that if you’re off by the smallest amount for any reason, mentally or physically, it’s hard to recover.

“But there’s no doubt in my mind that Asad belongs on the same level as the elite gymnasts who competed in the finals and he’ll be back next year for an even better performance.”

He qualified for the finals with a career high 14.366 Friday night. After waiting until the sixth and final rotation to compete Saturday, he knew he needed an improvement of 0.267 for a podium finish.

Jooma, from Knoxville, Tennessee, is a sophomore studying neuroscience. He started training in gymnastics when he was 4 years old. In August, he hopes to compete for Pakistan in Indonesia at the Asian World Games. “This is what makes me happy,” he said. Gymnastics is my life.”

– Jeffron Boynes contributed to this story