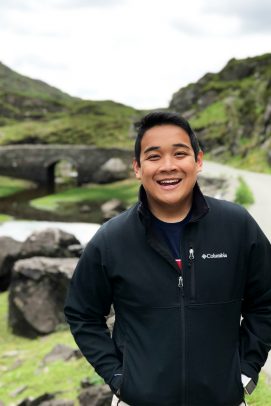 Like many students, Alan Sadural entered college thinking he would study one subject but later had a change of heart and found a career that fit his passion.

He started UIC as a biology student but switched to undeclared by his second semester — which gave him the freedom to explore his interests.

“Being undeclared was a really cool experience,” Sadural said. “I could explore so many different things and was not chained down to a curriculum.”

Inspired by his father’s career as a physical therapist assistant, Sadural decided to pursue occupational therapy. He joined the Pre-Occupational Therapy Club on campus and began a journey that would lead him down the path of gaining a dual degree in rehabilitation sciences and disability and human development.

“You need to find a passion, and start with that first,” said Sadural, a senior in the Honors College and Applied Health Sciences. “I think that enthusiasm grows over time. If you show enthusiasm and you show effort, for one certain club or hobby, it could branch off into so many new things and you can get involved that way.”

For his outstanding work on campus, Sadural was named UIC’s Lincoln Academy Student Laureate. The competitive award is given to seniors from each college in Illinois who have followed in the path of former President Abraham Lincoln by committing themselves to leadership and positive social change.

He received his award Nov. 17 during a ceremony at the Old State Capitol in Springfield, where he was asked to be the student speaker for the event.

“While I was initially nervous to accept, I just went for it, and I was really excited for the opportunity,” Sadural said.

After two years as a general body member of the Pre-Occupational Therapy Club, Sadural was selected as the vice president, then president of the group.

He is the sponsorship officer of the Colleges Against Cancer UIC student organization. He helped organize UIC’s first Relay for Life event on campus, which raised more than $11,000 for the American Cancer Society.

“It was amazing to see UIC’s student body gather together to support the fight against cancer,” he said.
He was also nominated by faculty to represent the College of Applied Health Sciences on the UIC’s Provost Student Advisory Board.

He was an undergraduate teaching assistant for the kinesiology department, assisting students in cadaver labs.

“I have never felt so much joy and satisfaction before than to simply help a fellow student discover their own ‘ah-ha’ moment during lab,” he said.

In addition to these achievements, Sadural also went after research opportunities, including working as a research assistant in the Shirley Ryan AbilityLab. He also spent hundreds of hours volunteering in pediatric units at rehabilitation hospitals in Chicago.

He plans to go to graduate school to ultimately become a pediatric occupational therapist.

“There were so many times when I was really nervous about saying ‘Yes’ to a certain opportunity, going to a meeting, or presenting in front of other people,” Sadural said. “When I did do it, afterward, I felt that I grew as a person. I think people need to understand that — you should not say ‘No’ to really great opportunities that come your way.”