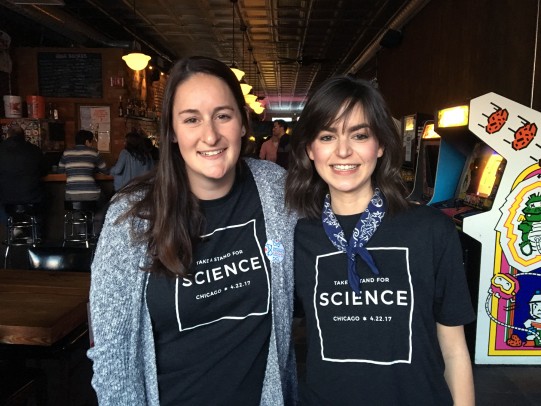 Eliza Jacobs-Brichford (from left) and Sineadh Conway are among UIC students involved with organizing the March for Science Chicago. “We want to keep the conversation alive about how much science contributes to every Chicagoan’s life,” says Conway.

As the March for Science campaign nears the eve of its worldwide demonstration April 22, organizers from UIC are eager to see how their work will fuel future activism.

Started in late January, the campaign was created as the first of several movements that would defend science and the use of evidence-based policymaking.

The Chicago demonstration, held in solidarity with the march in Washington, D.C., will be one of 514 happening globally. Thanks to efforts of scientists and science enthusiasts, as many as 40,000 people are expected to attend.

“We want to support the scientific community,” said Sineadh Conway, a student in the neuroscience doctoral program and community outreach volunteer. Other goals of the March for Science include safeguarding the value and funding of the scientific process, celebrating the role science plays in everyday life, and encouraging scientific curiosity and exploration. 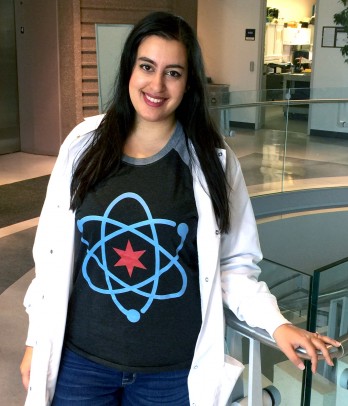 Deanna Arsala, a Ph.D. candidate in molecular, cell and developmental biology, is helping organize a pre-march event at UIC.

Conway is among a team of six UIC graduate and doctoral students who have spent weeks raising awareness for the march by contacting organizations, talking to community members, organizing fundraising events, selling merchandise, posting promotional flyers around the city and managing social media pages.

On Saturday, most team members will help direct foot traffic at the march, which starts at 10 a.m. with a rally on South Columbus Drive. The march will then head south toward Museum Campus, where a science expo will take place from noon to 3 p.m. Details for entry and exit points, speakers and exhibitors can be found online.

Brigitte Browe, a doctoral student in biological sciences, said anti-science actions demonstrated by the Trump administration influenced her decision to become a member of outreach and diversity committees for the march.

“I’ve seen a lack of respect for science,” she said, listing proposed budget cuts, censorship of scientists and attempts to place restrictions on publically available information as major events that led her to become an activist.

Others, like Conway, think the president’s executive orders on immigration threaten opportunities for growth and inclusivity in science. Her passion was ignited by the Women’s March in Chicago.

“It was a great day and I really felt part of something,” Conway said. “I think that brought some momentum in my mind to do more outreach, to get out of the lab more often and communicate with different types of people.” 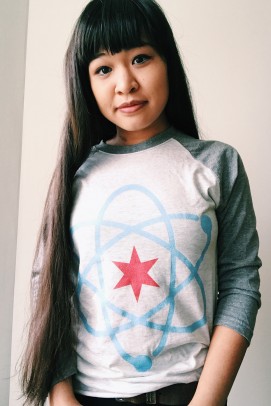 Alongside her at the Women’s March was Eliza Jacobs-Brichford, a graduate student in the psychology department’s behavioral neuroscience program. Conway asked Jacobs-Brichford to join her again for the science march.

“My reaction was, ‘How can I get involved?,’” Jacobs-Brichford said. She wanted to show her appreciation for science and the direct impact it has had on her life — advancements in medical research have allowed doctors and surgeons to treat her epilepsy.

“There’s this gratefulness that I feel for science, for making those advances in medication possible so I can sit here and be talking to you seizure-free,” she said.

“UIC’s principles are carried with volunteers,” said Luoth Chou, a graduate student in earth and environmental sciences, who highlighted the group’s value of diversity, inclusivity and unity.

Deanna Arsala, a Ph.D. candidate in molecular, cell and developmental biology, has spent 20 hours this week reaching out to students about the march and letting them know about a pre-march poster-making party that’s happening at UIC. Students, faculty, staff and researchers will come together from 3 to 6 p.m. Friday in Room 4068 Science Engineering Laboratories (SEL) to talk about science, share their research and create posters for the weekend.

“We’re all involved with research, we all love science and we’ve been trying to connect with a lot of people on campus,” she said.

A UIC gathering spot is also planned for Saturday. To march with the UIC Union Faculty Local 6465, student organizations, and other supporters, participants should meet at the Art Institute’s South Garden, 111 S. Michigan Ave., at 9:30 a.m. April 22. 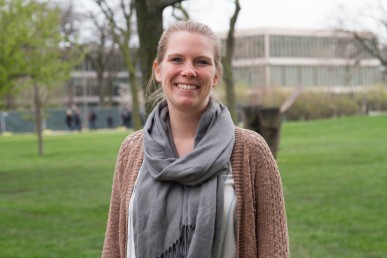 Arsala said the pre-march opportunities are small steps that can help bridge gaps between science and society.

“One thing that makes me proud to be at UIC is the awesome science that comes from here, so I’m hoping that this pre-march event can open doors for all undergraduates, graduates and other people who aren’t aware of the research that’s being done here,” she said.

The intention is to reach far beyond April 22.

“We want to celebrate the role that science plays in our society,” Conway said. “We want to keep the conversation alive about how much science contributes to every Chicagoan’s life.”

Meig Dickson, a Ph.D. candidate in molecular, cell and developmental biology, also collaborated to organize UIC involvement in the march.