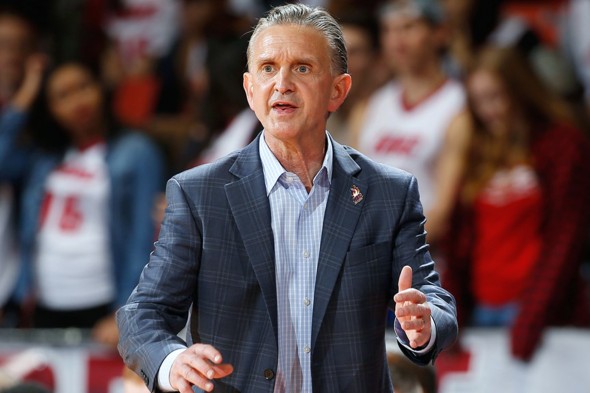 Head men’s basketball coach Steve McClain has agreed to a contract extension, pending Board of Trustees approval, that will keep him in Chicago to lead the Flames through the 2020–21 season.

“Steve has done a tremendous job in resurrecting the men’s basketball program in a short amount of time,” said athletics director Jim Schmidt. “He has laid the foundation for success with young men who are outstanding ambassadors for the team, the entire athletic department, and the University of Illinois at Chicago. The growth we have seen from year one to year two under Coach McClain’s leadership was evident to everyone who saw the Flames in action this past season. We are excited to watch that evolution continue as we strive together to develop champions on the court, in the classroom and in the community.”

McClain, the 11th head coach in program history, recently completed his second season at UIC. The 2016–17 campaign featured 17 wins and culminated with a postseason berth in the College Basketball Invitational. The Flames had one postseason victory in program history entering the year and they doubled that total over a five-day span in March with victories over Stony Brook and 2016 NIT champion George Washington en route to an appearance in the tournament semifinals.

The Flames also reached the semifinals of the Horizon League Tournament for just the third time since 2007–08.

UIC set a handful of single-season statistical records in the second season under McClain. The Flames scored 2,749 points, the most in program history, breaking the mark that stood since the 1986-87 squad. McClain also guided UIC to team records in 3-point field goals (272), rebounds (1,426) and blocks (184), while tying the record for assists (524) that was also set during the 1986-87 campaign.

“I want to profoundly thank UIC Chancellor Michael Amiridis and Athletic Director Jim Schmidt for sharing in the vision that we have developed together for this program,” McClain said. “I am incredibly excited for the direction that we are headed in as we continue to build a winning culture here at UIC. My family and I are thankful for the commitment that has been made to us. My wife, Kim, my son, Dylan, and I look forward to continuing to be part of something truly special right here in Chicago.”

Under McClain’s tutelage, junior Tai Odiase became the first player in program history to be named the conference’s Defensive Player of the Year. He finished in the top five nationally in blocks per game for the second consecutive season in 2016-17. Two Flames, Tarkus Ferguson and Dominique Matthews, were named to the Horizon League’s All-Freshman Team, as well.

In McClain’s first season at the helm, Dikembe Dixson was unanimously selected as the Horizon League Freshman of the Year, while also earning All-Horizon League Second Team honors. He set the conference’s scoring record for a first-year player with 594 points in 2015–16 and he earned Freshman of the Week honors a record nine times.