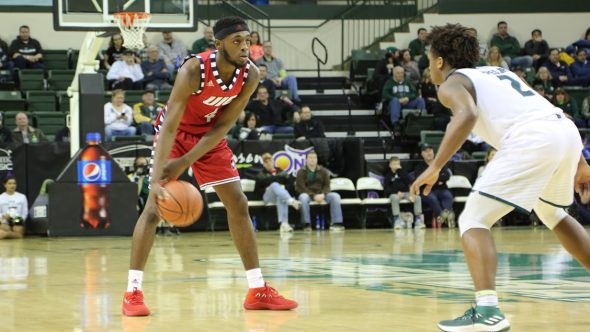 UIC will continue its run in the CollegeInsider.com Postseason Tournament at 7 p.m. Wednesday when the Flames take on the Austin Peay Governors in Clarksville, Tennessee, in a quarterfinal matchup.

The Flames (18-15) are coming off a convincing 84-61 victory over Saint Francis in the opening round March 14. It was both the largest margin of victory and the most points scored in a postseason game in program history. Six UIC players scored in double figures, led Clint Robinson with 15 points in 18 minutes off the bench, matching a career high. Tarkus Ferguson added a double-double with 11 points and 10 rebounds.

The Flames have won seven consecutive road games since Jan. 4. It’s the longest road winning streak in program history since the 2003-04 season, which culminated in UIC’s most recent NCAA Tournament appearance.
Austin Peay (19-14), which plays in the Ohio Valley Conference, won its first CIT battle over Louisiana Monroe on March 15, 80-66. The Govs got 27 points from Averyl Ugba on 11-of-16 shooting from the floor.

After being picked 11th in the conference, Austin Peay finished third in its conference in the regular season and reached the semifinals of the conference tournament for the second time in three seasons. Ugba is averaging 15.8 points per game, and Terry Taylor has been adding 15.1 points.