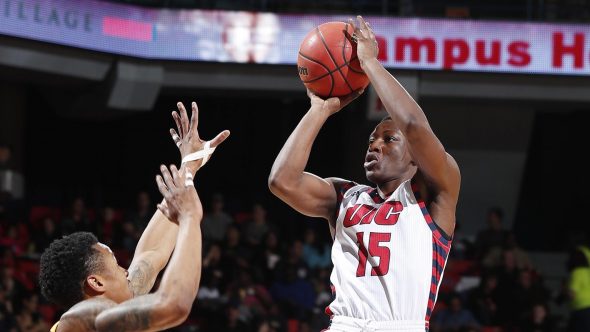 Fresh off the program’s first 20-win season in 14 years, UIC head coach Steve McClain has assembled a schedule the will test a team on the rise and undoubtedly prepare the squad for the rigors of Horizon League play.

UIC’s 2018-19 nonconference schedule features games against two programs that won a combined five NCAA Tournament games in March and another contest against the top-seeded team in last year’s NIT.

“It’s rare that you can put together a schedule of this quality, especially the teams we have coming to our building,” McClain said. “When you have programs like Bradley, Loyola and Illinois State coming to Chicago, it should create a great atmosphere for college basketball in our city. I expect our fans to come out in full force and fill up the Pavilion all season long.”

The Flames will begin play with the 2018 Gotham Classic. UIC opens the campaign at Notre Dame on Nov. 6 before visiting 2018 Big South Conference champion Radford on Nov. 9. The three-game road trip concludes with a visit to Duquesne on Nov. 12.

The home opener is set for Nov. 15, when William & Mary comes to the UIC Pavilion to wrap up the Gotham Classic. That contest is the first in a three-game homestand that also features visits from in-state rival Bradley (Nov. 17) and UW-Parkside (Nov. 24). Like UIC, Bradley is a team on the rise after earning its first 20-win season since the 2008-09 season a year ago. The Braves are one of only four schools in the country to improve by at least five wins in each of the last two years.

After Saint Joseph’s came to the Windy City for a memorable overtime clash last season, the Flames will make the return trip to Philadelphia on Nov. 28. It will be the third meeting all-time between the teams and the first outside of Chicago.

The month of December opens with a splash because 2018 NCAA Final Four participant Loyola Chicago will make the short trip from Rogers Park to the Near West Side on Dec. 1 to continue a longstanding rivalry between city foes. That same week, the team that fell against the Ramblers in the 2018 Missouri Valley Conference championship game, Illinois State, will be in Chicago for a matchup on Dec. 5. Last season’s meeting between UIC and ISU came down to the wire with the Redbirds picking up a one-point win on their home floor.

On Saturday, Dec. 8 the Flames will take a trip to Boulder, Colo., to meet the Colorado Buffaloes for the first time ever. McClain served as the associate head coach at Colorado under former head coach and UIC alum Jeff Bzdelik from 2007-10. There he helped mentor Alec Burks, the 2010 Big XII Freshman of the Year and 12th overall pick in the 2011 NBA Draft by the Utah Jazz.

Following a break for final exams, UIC will visit Wintrust Arena for the first time to meet the DePaul Blue Demons on Dec. 14. The last time the Flames knocked off the Blue Demons, in 2016, it was at McGrath-Phillips Arena on the school’s Lincoln Park campus.

The nonconference schedule wraps up with a pair of home games. Incarnate Word will visit the Pavilion on Dec. 17 before Saint Francis comes calling on Dec. 21.

The Horizon League schedule begins on Dec. 28 against defending conference champion Wright State. That road test will be televised on ESPN2. To see the full #HLMBB slate, please click here.

For information about ticket packages for the 2018-19 season, please click here.

While start times throughout the season may vary based on television designations, UIC is proud to announce that six weekend home games throughout the season will tip off at the unique time 3:12 p.m. As the Flames celebrate their direct tie to the City of Chicago, the new time reflects the area code of downtown Chicago, the UIC campus and the surrounding area. The 312 games are against UW-Parkside (Nov. 24), Loyola (Dec. 1), Cleveland State (Jan. 12), Oakland (Jan. 26), Northern Kentucky (Feb. 3) and Milwaukee (Feb. 24).

UIC returns seven letter-winners from a group that posted the program’s first 20-win season since 2003-04. That group, which helped the team finish third in the Horizon League with a record of 12-6, includes the 2018 Horizon League Sixth Man of the Year Godwin Boahen and five of last season’s top seven scorers in Juniors Marcus Ottey, Tarkus Ferguson, Dominique Matthews, Jordan Blount and Boahen.