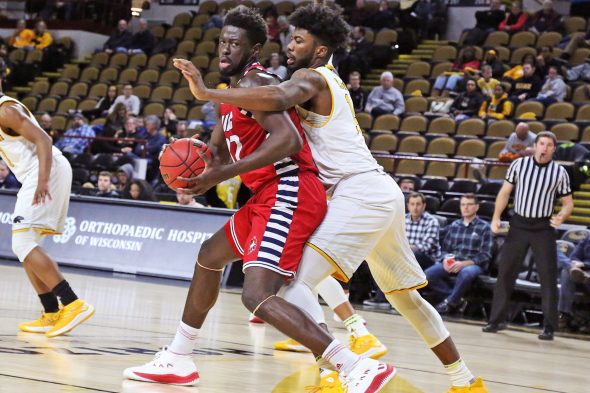 Clint Robinson scored the final basket of the game Monday versus Milwaukee. The Flames have won seven of their last eight games. (Photo: UIC Athletics)

UIC extended its winning streak to a season-best four games Monday night with a convincing road win at Milwaukee, 74-56.

The Flames (12-11, 7-3 Horizon League) have won seven of their last eight games and posted the program’s first four-game winning streak since 2012. UIC has also won four straight road contests for the first time since 2004.

Tarkus Ferguson scored a game-high 19 points, adding six rebounds and five assists. Godwin Boahen had 13 off the bench and shot 75 percent (3-of-4) from beyond the arc in the victory.

Dikembe Dixson took control of the game early on, netting UIC’s first seven points. He opened the scoring with a baseline layup before hitting a 3-pointer about two minutes later that put the Flames in front, 7-4. The sophomore also produced two steals while matching up against UWM’s leading scorer Brock Stull.

The Flames found a rhythm from beyond the arc in the first half against the Panthers. UIC shot 58 percent (7-of-12) from long distance over the first 20 minutes with seven triples. Three came from Ferguson, while Dixson, Boahen, Dominique Matthews and Michael Diggins each buried one.

The Flames turned the ball over seven times in the first 12 minutes, which led to 10 Milwaukee points. UIC committed only one mistake in the final 7:30, and the Panthers could not score off that error.

UIC expanded its lead from two points to nine over the final 2:50 of the first frame. Boahen stepped into a 3-pointer off a pass from Ferguson with 2:50 remaining to push the lead to five, 33-28. Diggins hit a triple with 2:16 left in the half, and Ferguson converted four free throws in the final 1:35 to help the Flames carry a 40-31 lead into the break.

Boahen continued to exhibit a hot hand from downtown in the second half. His three-pointer with 14:29 remaining put the Flames in front by 12, the first time the lead reached double digits. On the next possession, Diggins splashed another home to increase the lead to 15 with just under 14 minutes to go.

The Panthers chopped the lead to 11 with 7:18 to go, but that was their final field goal of the game.

With the game and shot clocks winding down, the Flames punctuated the win in style. Ferguson dribbled out the clock and broke toward the basket as the seconds ticked off. At the last moment, he spotted Clint Robinson running to the basket and fed him the ball for the game’s final tallies.

The Flames will continue their three-game road trip this week with a game at 8 p.m. Friday in Oakland. The contest that will be televised nationally on ESPNU.