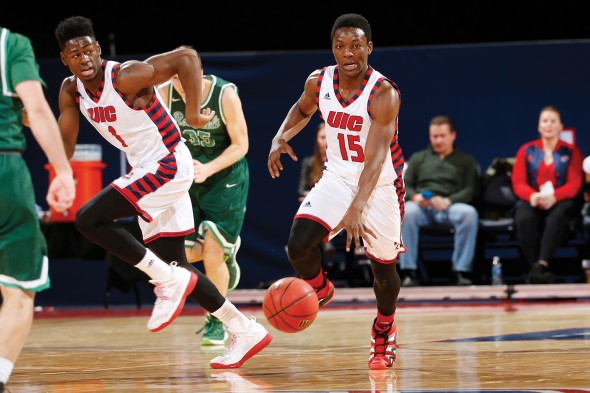 In a physical, knock-down, drag-out, defensive ballgame, the visiting Oakland Golden Grizzlies narrowly escaped the UIC Pavilion with a one-point victory over the UIC Flames, 58-57.

Oakland’s Jalen Hayes scored the game-winning basket when he put back his own miss with 1:37 remaining in the game. That bucket came less than 30 seconds after UIC’s K.J. Santos delivered a three-pointer from the right corner that capped an 8-0 run and gave the Flames a slim 57-56 lead.

Both teams guarded well throughout the contest, particularly in the second half. UIC made just six field goals over the final period; however, Oakland was not much better. The Golden Grizzlies made 9-of-31 from the floor in the second half, and all eight attempts from the free throw line, to erase a six-point halftime deficit.

UIC’s Tai Odiase secured his third double-double of the season behind 10 points and a season-high 13 rebounds. The Glenwood native added five blocks and a steal in 29 minutes. In two games last weekend against Detroit Mercy and Oakland, Odiase averaged 10.5 points, nine rebounds and 6.5 blocks.

The Flames will hit the road for a two-game swing through Northeast Ohio this week. The first stop is Cleveland Thursday, when UIC will face the Cleveland State Vikings at 6:45 p.m. at the Wolstein Center.

The second stop will be at the Youngstown State Penguins at 6 p.m. Saturday. Both contests are slated to air on ESPN3.