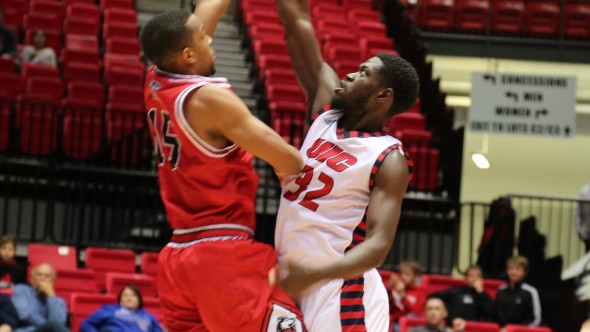 Cheer on the men’s basketball team tonight at the Pavilion when they host the Chicago State Cougars at 7 p.m. Students get in free with their i-card.

Dikembe Dixson scored at least 31 points for the Flames for the second time during the Northern Illinois Thanksgiving Classic, but it wasn’t enough to push past the Huskies Saturday. The Flames lost, 92-81.

Dixson shot 58.3 percent from the field against the Huskies and made a career-high 14 shots from the free-throw line.

Freshman Marcus Ottey scored a career-high 16 points for UIC, while classmate Tarkus Ferguson was also in double figures with 11. Dixson and Tai Odiase led the way on the glass with five rebounds each.

Clint Robinson scored a couple of baskets inside to help UIC slice the deficit to five points, 26-21, with 8:10 left in the half.

UIC got the Huskies into foul trouble, and two free throws from Ottey helped the Flames finally claw to within a point, 34-33.

The Huskies scored 12 points off 10 UIC turnovers to take a four-point lead into the locker room, 42-38.

A three-pointer from Dixson put the Flames back to within two, but the Huskies scored six unanswered points to push the lead back to eight, forcing UIC to use a timeout with 13:32 remaining.

Northern Illinois eventually got its lead back up to a game-high 14 points with 9:11 to go.

UIC went on an 8-0 run to cut its deficit to six points with 7:17 remaining, but a quick five-point surge got the edge back to double digits (11) with 5:25 left on the clock.

NIU was ahead by as many as 15 points with 2:42 to go, but UIC could only get within 11 points as Ferguson hit a three-pointer from the right corner in the waning seconds.