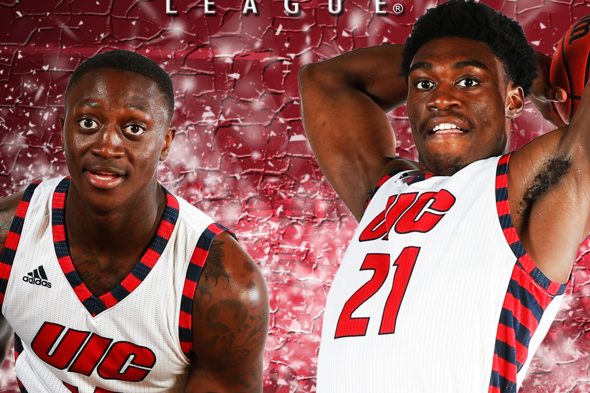 Entering the third season under head coach Steve McClain, the UIC Flames were picked to finish third in the Horizon League Preseason poll as selected by the conference’s head coaches, media members and sports information directors.

UIC is coming off a season in which it won 17 games and advanced to the semifinals of the College Basketball Invitational. The Flames returned to the postseason for the first time since 2013 and were the only Horizon League program to win multiple postseason games a year ago, with victories over Stony Brook and George Washington in the first two rounds of the CBI. UIC orchestrated one of the largest turnarounds in the sport by winning 12 more games than the previous season.

In addition to the preseason prognostication, the conference unveiled All-Horizon League First and Second teams. The Flames are represented on both five-man teams with sophomore Dikembe Dixson earning a spot on the First Team for the second consecutive season, and senior Tai Odiase staking a claim on the Second Team for the second year in a row.

Dixson was limited to nine full games in 2016 before suffering a season-ending knee injury Dec. 14. Dixson started 10 games and led UIC with 20.3 points per game, while also grabbing six rebounds per contest. He scored at least 31 points in three of the nine full games he played and had one double-double. Dixson was shooting 47.7 percent from the field, 36.7 percent from 3-point range and 78.6 percent from the free-throw line at the time of his injury. He received a medical hardship waiver and retains three seasons of eligibility beginning this fall.

As a freshman during the 2015–16 season, Dixson was unanimously selected as the Horizon League Freshman of the Year, while also earning a spot on the All-League Second Team. That season he broke the conference’s record for most points in a single season by a freshman with 594. He ranked third in the conference in scoring, seventh in rebounding and second in minutes played.

Odiase, the reigning Horizon League Defensive Player of the Year, was voted onto the Second Team. The Glenwood native led the Horizon League and ranked fourth in the NCAA with 104 blocks a year ago, which was the second best single-season total in program history. Odiase was one of four players nationally to block at least eight shots in a game twice last season, while he tied for the team lead with seven double-
doubles. He was one of two Flames to start all 36 games, and he led the squad in both scoring with 11.4 points and rebounding with 6.9 rebounds, both career highs.

UIC opens the season with a five-game homestand beginning Nov. 10 against North Carolina Central. The Flames will host Saint Joseph’s (Nov. 13), Delaware State (Nov. 16) and Fort Wayne (Nov. 18) over the first week of the season before welcoming Olivet Nazarene for an exhibition game Nov. 22. Tickets are on sale now; for information or to purchase, call 312-413-8421.